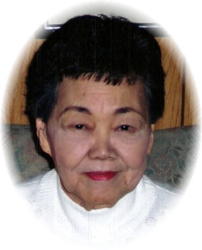 A gathering will be held at the Miller-Carlin Funeral Home in Holdingford from 1-3:00 PM on Tuesday, November 10.  Graveside ceremony immediately following.  Internment will be at St. Francis of Assisi Cemetery in St. Francis, MN alongside her husband, Leander Chromey.

Akiko was born on January 9, 1929 in a rural town outside of Tokyo, Japan.  She married Leander in 1956 at the consulate in Japan.  She retired from Target in the 90’s while supplementing income by sewing pagent costumes from home.

There will be a gathering for family and friends from 1:00-3:00 PM on Tuesday, November 10, 2015 at the Miller-Carlin Funeral Home in Holdingford.

A graveside ceremony will be heldat the St. Francis of Assisi Cemetery in St. Francis, MN alongside her husband, Leander Chromey. Father David Grundman will officiate.

Aunt “Ike” was a very special person. Every year her and I exchanged letters with our Christmas cards. ( I will miss our exchange this Christmas)

Ike sent me a very compassionate letter when my wife Margaret died two years ago.  Now Ike and Lenny are together in the next life.