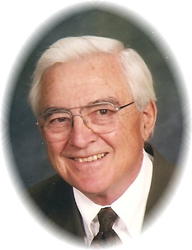 The mass of Christian Burial, celebrating the life of Alexander D. Didier, age 85 of St. Cloud will be 11:00 AM Saturday, May 22 at St. Augustine’s Catholic Church in St. Cloud.  Burial will be in Assumption cemetery.  Alex died Wednesday at the Quit Oaks Hospice.  There will be a visitation from 4-7:00 PM Friday, May 21 at the Miller-Carlin Funeral Home in St. Cloud and then after 10:00 AM Saturday at the church.  St. Augustine’s parish prayers will be at 7:00 PM Friday at the Miller-Carlin Funeral Home in St. Cloud.Alexander D. Didier was born July 1, 1924, in St. Martin, Minnesota, to Alexander M. and Mary Magdalena (Holper) Didier.   On June 7, 1949, he married Ann Marie Doll at the Sts. Peter and Paul Catholic Church in Richmond, Minnesota.  He farmed on the family farm in St. Martin Township until 1948, after which time he went to work at the State Bank of Richmond and then for the National of Hartford Insurance Company (CNA Group) in the states of Indiana, Kansas, and Minnesota, as a state Special Agent.  He returned to banking as Chairman and CEO of the Union State Bank of Amery, Wisconsin, and then The First American National Bank of St. Cloud, Minnesota (Bremer Banks), and as Regional President of the five Region Three Bremer Banks.  He retired in 1999 after 40 years in the banking and insurance industries.After retirement he founded and served as Chairman of Citizens Savings Bank of St. Cloud (now ING Direct).  He also served on the bank boards of the State Bank of Richmond, Reliastar Bank, and Falcon National Bank.  Alex was a graduate of the University of Minnesota School of Agriculture; the Wisconsin School of Banking; and the Harvard Senior Bank Management School.
Alex believed in volunteerism, and participated in many financial drives and other activities for various nonprofit organizations. He served on the Boards of: Bremer Financial Services; Minnesota Council of Foundations; Central Minnesota Initiative Fund (Director); Central Minnesota Boy Scouts (President and Director); College of St. Benedict (Chairman and Trustee); St. Cloud State University Foundation Board; Catholic Charities of St. Cloud; Finance Council of the Diocese of St. Cloud; St. Cloud Country Club; Investment Advisory Committee of Sisters of the Order of St. Benedict; Chairman of the Risk Management Committee and member of the Operating Committee of the American Bankers Association; Minnesota Bankers Association Legislative Committee; and Advisor to Group IX of the Kellogg Foundation National Fellowship Program.  He was co-founder and Director of the United Way of Amery, Wisconsin.   Alex was founder of the Central Minnesota Community Foundation (CMCF), served as its President and Director, and remained a life-time honorary director.  Alex looked on the CMCF as his finest contribution to central Minnesota, and the highlight of his career.  He enjoyed keeping abreast of the progress of the Foundation, and was pleased by the dedication and quality of its volunteers on the Board and various committees who shared his vision of the value of the CMCF.  Accustomed to hard work from his childhood on the farm, he lived life with energy, vision, integrity and service to others.  Alex enjoyed and loved his family, work, banking, hunting and farming, and remained active on his farm until after his 83rd year.  He prided himself in being a good steward. His family and friends will miss his companionship in life, adventure and work.Survivors include his wife Ann; St. Cloud,  daughters Mary Brazys (Daniel), St. Joseph; Jean Didier (Neil Franz), Albany; grandchildren Samuel Brazys (Jamisen) of Kolonia, FM; Julia and Madeline Franz of Albany; sisters and brother, Loretta Neils of St. Paul; Marcella Thomte of St. Paul; Evangeline Noll of St. Martin; and Joseph of St. Paul.  He is preceded in death by his parents; brothers Aloys, Mark, Alfred and Sylvester; and sisters, Genevieve Knaack, Margaret Lepenski, Virginia Van Hoose, Christine Cole, and Elizabeth Bennett.

Memorials may be sent to the Central Minnesota Community Foundation, Administration Endowment

Sending my condolences to you, Ann, and your Family.
We will miss Al Didier…..a leader, a warm friend, and a great human being. I am sorry for your loss……
….Ray Galarneault