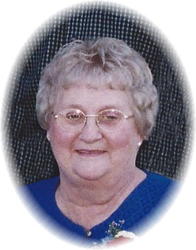 Mass of Christian Burial celebrating the life of Alma A. Frieler, age 84, of Albany, will be at 11:00 AM on Monday, April 27, 2015 at St. Mary’s Catholic Church in Upsala.  Father John Odero will officiate and burial will take place in the parish cemetery.  Alma passed away peacefully early Thursday morning with family by her side at the Mother of Mercy Nursing Home in Albany.  There will be a visitation from 4:00-8:00 PM Sunday, April 26, 2015 and again after 10:00 AM Monday at the church in Upsala.  Parish prayers will be at 7:00 PM Sunday evening.  Arrangements are being made with Miller-Carlin Funeral Home, Upsala.

Alma was born July 28, 1930 to Fritz and Bertha (Herzog) Dickhaus in Melrose.  She grew up in town alongside nine siblings.  On June 20, 1950, Alma married Bernard Frieler in Melrose and they welcomed ten children to complete their family.  From 1950-1970 she and Bernard farmed while raising their youngsters in Upsala.  They also owned and operated the Uptown Cafe in Upsala and the Rainbow Cafe in Holdingford and Alma is remembered as being a hard-working woman.  Bernard handled most of the PR for their businesses and Alma loved the time she spent baking and cooking in the cafes.  She retired in 1985 after selling their businesses and spent many years as a “snowbird” spending winters in Arizona.  Alma enjoyed travelling, spoiling the grandkids, flower gardening, and sewing.  Over the years she has made many clothes for her children, and as they grew-up, for her grandchildren as well.  Alma was a strong-willed feisty lady who cared for so many people.  She was a member of St. Mary’s Catholic Church in Upsala and the Christian Mothers.