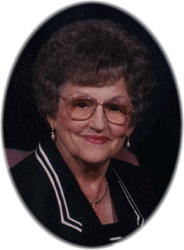 The Mass of Christian Burial will be 11:00 AM Friday, December 30 at St. Paul’s Catholic Church in St. Cloud for Alma E. Rau, age 93 of St. Cloud, who died Monday at her home.  Burial will be in Assumption Cemetery.  There will be a visitation from 4-8:00 PM Thursday at the Miller-Carlin Funeral Home in St. Cloud and again after 10:00 AM Friday at the church.  St. Paul’s parish prayers will be at 5:30 PM.Alma was born December 7, 1918 in Albany, MN to John and Mary (Deters) Silbernick.  She grew up in Albany and then moved to St. Cloud.  She married Clarence M. “Curly” Rau on May 10, 1938 at Seven Dolors Catholic Church in Albany.  The couple lived in St. Cloud; Curly died in 1973.  Alma was an Executive Secretary at St. Benedict’s Senior Community from 1974 until she retired in 1992.  After her retirement, she returned to St. Benedict’s Senior Community as the Coordinator for Planned Giving until 1998.  She was a Charter member of St. Paul’s Catholic Church, where she was a member of The St. Paul’s Christian Women, Daughters of Isabella, Legion of Mary, and a religious education teacher.  She was also a member of the VFW Auxiliary, the Eagles Auxiliary, an Oblate of the Order of St. Benedict, and a Eucharistic Minister at St. Benedict’s Senior Community.Alma is survived by her children; Dennis (Ellen) Rau, Minneapolis; Diane (Tom) Bosl, Sartell; Katie (Greg) Szczech, Sauk Rapids; John (Karen) Rau, Farwell; Joseph Rau, St. Cloud and Mary (John) McMahon, Dripping Springs, TX.  She is also survived by her sister, Sr. Arles Silbernick, OSB, St. Cloud, nine grandchildren and nine great-grandchildren.She is preceded in death by her parents, her husband, Curly Rau, her brothers and sisters, Frank Tonyan, Anne Markus, Sylvester Silbernick, Norbert Silbernick and Clarence Silbernick.

There will be a visitation from 4-8:00 PM Thursday and again after 10:00 AM Friday at the church. St. Pauls parish prayers will be at 5:30 PM on Thursday.

December 28, 2011
Dear Dennis, Diane, Katie, John, and Joe,
Alma was one of those people who would make everyone she met feel loved. When I was a young child Alma was was not only like a second mother to me but was also one of my most trusted and best friends. Almas constant smile and pleasant attitude would always make any surroundings brighter just by her being there. May you be comforted by knowing that she is now welcomed into her eternal reward by our Lord, and Curly, my mother and dad, and many of her dear friends who have gone before her. Please accept our deepest sympathies,

Denny, Diane, Katie, John, Joe, Mary and families-
Auntie Alma Curly always added grace and senrenity to the Rau gatherings. She was always interested and listened intently to what was going on in our lives. Please know that my thoughts and love are with you at this time- Rhonda

Aunt Alma was a part of my life all through the growing up years . So many holidays filled with fun were shared with your family. I especially remember all the wonderful Christmas “traveling parties”. How blessed we all were to be part of such a wonderful extended family.
Now that Aunt Alma is in heaven, all of the Rau siblings and their mates are finally together again. What a joyous reunion that must have been. Knowing that all of us will someday be reunited brings both consolation and anticipation.With my sympathy and love , your cousin Yvonne

My thoughts and prayers are with you at this time.Aunt Alma was wonderful person.She will be greatly missed.I know she is in heaven with Uncle Curly having a grand time.With love Suzy