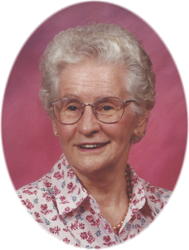 The Mass of Christian Burial, celebrating the life of Alma K. Mergen, age 89, of Albany will be 11:00 AM, Monday, June 6 at the Seven Dolors Catholic Church in Albany.  Burial will be in the parish cemetery.  Alma died Wednesday at the Mother of Mercy Nursing Home in Albany.  There will be a visitation from 4-8:00 PM, Sunday and again after 10:00 AM Monday at the Seven Dolors gathering space.  Parish prayers will be at 4:00 PM Sunday in the gathering space.  Arrangements are being made with the Miller-Carlin Funeral Homes.

Alma was born February 9, 1927 in Melrose to Henry and Rose (Thielen) Enneking.  She married John Mergen on June 18, 1947 in Melrose.  The couple moved to Albany for a short time before moving six miles south of Albany to their farm in Farming township.  Alma worked with her husband on the farm and raised their 10 children.  After John died in 1995, Alma moved to Albany.  She was a member of the Seven Dolors Catholic Church, the Seven Dolors Christian Mothers, the St. Agnes Mission Group, she was a sacristan from many years at Seven Dolors and she also taught CCD.

Mass of Christian Burialwill be 11:00 AM onMonday, June 6, 2016 at the Seven Dolors Catholic Church in Albany. Fr. Cletus Connors, OSB will officiate and burial will follow in the parish cemetery.