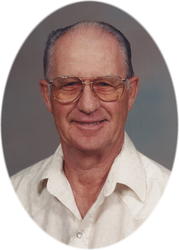 Mass of Christian Burial celebrating the life of Alvin “Al” E. Scholz, 84, of  Upsala, formerly of St. Francis will be at 11:00 AM on Wednesday, March 11, 2015 at St. Francis of Assisi Catholic Church in St. Francis.  Father John Odero and Father David Grundman will concelebrate and burial will be the parish cemetery.  Al passed away at the St. Cloud Hospital on Wednesday morning, March 4, 2015.  There will be a visitation from 4:00-8:00 PM on Tuesday, March 10, 2015 at St. Francis of Assisi Catholic Church of St. Francis and again after 10:00 AM until the time of the service Wednesday at the church.  Catholic United Financial Men’s group will pray the rosary at 6:15 PM followed by Parish Prayers at 7:00 PM Tuesday evening. Arrangements are being made with Miller-Carlin Funeral Home of Upsala.

Alvin was born on June 12, 1930 to Joseph and Mathilda (Verkennes) Scholz in St. Francis.  He grew up and attended school in Upsala. Al was a member of St. Francis of Assisi. He was a lifelong St. Francis resident where he worked the family farm. He was also employed as a truck driver for Golden Plump-the former Jack Frost Company.

We were so glad to have been able to visit with Alvin in October when we were in Swansville for a family gathering with Rita Stiller and the Lashinski relatives.  Unfortunately, we are unable to attend Alvin’s funeral but want you to know that we are with you in our thoughts and prayers.  It is sad to say that Alvin was the last of the Joe Scholz family.  Now the children are left to carry on the name and family traditions that we were brought up with.  We will always remember his quiet gentleness, warm, friendly smile and his love for music.  May God bless you and keep you in His tender care during this difficult time and always.   With Sympathy and Love,    Gene and Vickie

We are sorry that we are unable to attend the funeral.  We also had a great visit with Alvin last October thanks to Rita Stiller who got us all together.  One of my favorite memories is sitting on his lap when I was just a small child.  He had his army uniform on and we were sitting on Grandma & Grandpa’s front porch on the farm. Know that we are with you in prayers and thoughts.  It is hard to lose a parent no matter what age you are.