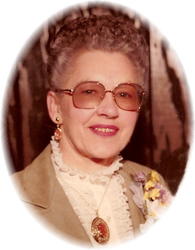 ALVINA (SANDY) KOGLIN
May 14, 1921 – February 17, 2010The Mass of Christian burial celebrating the life of Alvina (Sandy) Koglin, age 88 of Albany, will
be 11:00 AM, Monday, February 22 at the church of the Seven Dolors in Albany.  Burial will be
in the parish cemetery.  Sandy died Wednesday at the St. Cloud Hospital.  Friends may call from
4-8:00 PM Sunday and again after 10:00 AM Monday at the church in Albany.  Seven Dolors
parish prayers will be at 4:30 PM followed by the Christian Mothers at 7:00 PM and Legion
Auxiliary at 7:30 PM Sunday at the Church in Albany.  Arrangements are being made by the
Miller-Carlin-Brenny Funeral Home in Albany.Sandy was born May 14, 1921 in St. Anthony to Nicholas and Anna (Olberding) Sand.  She grew
up in St. Anthony and moved to Albany.  She married Eugene Koglin on February 14, 1953 in
Albany and the couple has lived in Albany all of their married life.  Sandy worked as a cashier for
Ebnet’s Market and then Amby’s Market in Albany.  She also was active in the Albany Pioneer
Club where she managed the country store.  She enjoyed traveling, fishing, baseball, football,
bowling, cooking & baking, and the occasional trip to the casino.  She was a member of Seven
Dolors Catholic Church, the Seven Dolors Christian Mothers, the Albany American Legion
Auxiliary and the Mother of Mercy Nursing Home Auxiliary.Sandy is survived by her husband, Gene, Albany; her brothers and sisters, Theresa (Norbert)
Goebel, Albany; Victor Sand, Albany; Loretta (Ed) Petermeier, Melrose; Lawrence Sand,
Freeport; Vera Ritter, Melrose; sister-in-law, Clara Sand, Upsala and brother-in-law, Clarence
Ritter, Melrose.Sandy is preceded in death by her parents and her brothers and sisters, Henry Sand, Alfred Sand,
Alma Pundsack, Richard Sand, Helen Sand, Frieda Kerfeld and Monica Ritter.

The Mass of Christian burial celebrating the life of Alvina (Sandy) Koglin, age 88 of Albany, will be 11:00 AM, Monday, February 22 at the church of the Seven Dolors in Albany.