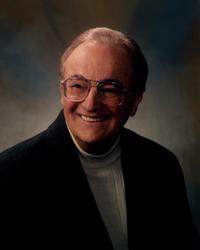 Services celebrating the life of Andy Hilger, age 83 of St. Cloud, will be 10:30 AM, Friday August 23 at St. Mary’s Cathedral Upper Church.  Monsignor Richard J. Mahowald will officiate and burial will be in Assumption Cemetery.  Andy died Sunday at the St. Benedicts Senior Community in St. Cloud.  There will be a visitation from 4-8:00 PM Thursday at the Miller-Carlin Funeral Home in St. Cloud.  Parish prayers will be at 4:00 PM Thursday at the funeral home.  Arrangements are being made by the Miller-Carlin Funeral Home, St. Cloud.Andy was born June 12, 1930 in St. Paul to Andrew and Winifred (Stockwell) Hilger.  He attended St. Thomas Academy and St. Thomas University in St. Paul.  He served in the U.S. Air Force during the Korean war from 1953-1955.  He worked at KCIM Radio in Caroll, Iowa from 1955-57.  He was with KYMS Radio in Mankato in 1957 and 1958.  In 1958, Andy moved to St. Cloud and started with WJON where he was known as “Tin Pan Andy”. He purchased half-interest in the radio station in 1965.  Andy married Carol Hieserich in St. Mary’s Catholic Church in Melrose on August 28, 1965.  Andy built WJON Cablevision in 1968, bringing cable television to St. Cloud.  He later sold that in 1973.  He started 98 Country in 1971 and he purchased Oldies 94.9 in 1989. For 40 years, he shared his thoughtful views in daily editorials, including political endorsements, always with an offer to broadcast opinions that differed. He helped found the St. Cloud Area United Way and the Central Minnesota Community Foundation, and led numerous community fund drives and capital campaigns. In the late 1980s, a St. Cloud Times poll named him St. Cloud’s most influential citizen.   He sold these radio stations in 1999.  Andy maintained ownership of Spirit 93 FM, a radio station that he started in 1996 and later donated to the St. Cloud Catholic Diocese, and volunteered to serve as its manager for six years.  In 2008, he also found time to build and operate KYES, an AM Catholic programming station.  Andy was inducted into the Museum of Broadcasting Hall of Fame in 2006. Andy was also active in his church, he organized Jesuit men’s retreats since 1960 and Jesuit women’s retreats since 1993.  He also was involved in ministry at the St. Cloud Correctional Facility for men.  He traveled to Rome and met Pope John Paul in 1989.  Andy was a member of St. Mary’s Cathedral and the St. Cloud Eagles Aerie.Andy is survived by his wife, Carol, St. Cloud; his children, John (Andrea) Hilger, Coon Rapids; Kevin (Teresa) Hilger, Maple Grove; Shelly (Josh Behnke) Hilger, St. Cloud and Mollie (Dave) Werschay, St. Augusta.  He is also survived by 11 grandchildren, J.D., Bailey, Abbey & Grace Hilger; Ryan, Colton & Addison Hilger; Sam & Nick Byers; and Leo & Lydia Werschay.  He is also survived by his brother and sister, Dr. Jack Hilger, Roy, WA and Molly Thibault, Shoreview.Andy is preceded in death by his parents and his nephew, Greg Thibault.Memorials are preferred to the Central Minnesota Community Foundation.

There will be a visitation from 4-8:00 PM Thursday at the Miller-Carlin Funeral Home in St. Cloud.

Memorials are preferred to the Community Foundation

Praying for you all. Andy was a great husband, father and faithful servant. We will all miss him.

John, Kevin, Shelly, Molly & Carole, my thoughts and prayers are with y’all.

Dearest Carol and Family,
Although I never got the honor to meet Andy, I just want you all to know that you are in my thoughts and prayers as you gather to remember Andy. I understand that he was quite a wonderful person and he did great work for his community and touched the hearts of those he came in contact with. I am so blessed that I have come to know all of you and wish you God’s love. Please know that you are held close as you go through these moments celebrating Andy’s life and the love he has shared with so many. My Love to you all. Sharon.

We loved Andy and we love you Carol! God’s Blessings on you and your family!

We loved Andy and we love you, Carol! God’s Blessings on you and your family!

Carol and Family:
Please know we are thinking of all of you and send all of you our thoughts and prayers. Andy had a gentle spirit will always be fondly remembered. Be comforted in knowing he is with others we love.

Although I did not know Andy personally, I know he did great things in the world of broadcasting. All of us at KLQP-FM in Madison-Dawson, Minnesota extend our deepest sympathies to Andy’s family and friends.

Carol and Family,
We just read Andy’s obituary and are sharing in your sadness of his loss. Andy was such a wonderful man and so willing to share of his talents. God has gained a super MC in Heaven. Prayers for peace to you and your family.

So sorry to hear about your loss. We have such fond memories of the early mornings at the ice arena with all of you. You are in our thoughts and prayers.

As a nearly decade long member of the WJON team, I am deeply indebted to Andy and the lessons he taught. All of us fortunate enough to know and work with Andy thank God that he came our way.

Thinking of you with prayers and remembering fond memories of “Brutger” gatherings at the holidays.
Sincerely, Mary J Brutger