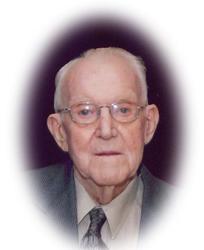 The Mass of Christian Burial, celebrating the life of Anton “Tony” Heinen, age 94 of Albany will be 10:30 AM Saturday, January 8, at Seven Dolors Catholic Church in Albany.  Friends may gather from 4-8 PM Friday and again after 9:30 AM Saturday at the church.  Tony died Tuesday at the Albany Area Hospital.  Burial will be in the parish cemetery.  Seven Dolors Parish Prayers will be at 4:30 PM Friday followed by the St Joseph’s Society and the Albany Knights of Columbus at 5:00 PM.  Arrangements are being made by the Miller-Carlin-Brenny Funeral Home in Albany.Tony was born August 11, 1916 in Albany to Matt and Agnes (Kuper) Heinen.  He married Angeline Winskowski on October 26, 1939 in St. Hedwigs Catholic Church in Holdingford.  The couple farmed together for over 30 years  in the Albany area before they moved into Albany.  He was a clerk for School District 111 and also worked for the DHIA, retiring in 1983.  He loved farming and his family. Tony enjoyed dancing, playing cards, and hunting.  Tony was a member of the Seven Dolors Catholic Church, the St. Joseph’s Society, and the Knights of Columbus.Tony is survived by his wife, Angeline, Albany; his children, Robert (JoAnn) Heinen, Bemidji; Kenneth (Helen)Heinen,  New London; Michael (Maureen) Heinen, Waite Park; Karen (Mark) Schneider, St. Joseph; 16 grandchildren, 30 great-grandchildren and one great-great grandchild.  He is also survived by his sisters, Clara Klimmek, Holdingford and Helen Scepaniak, Albany.Tony is preceded in death by his parents, his brothers and sisters; Elizabeth Miller, Theresa Ewertowsky, Bernard Heinen, Matt Heinen, Herman Heinen and Andrew Heinen. His half-brothers, Joseph Heinen, Benedict Heinen, Alois Heinen and his half-sister, Mary Bloch.