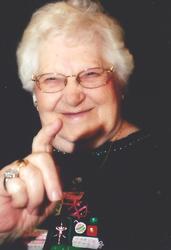 The Mass of Christian Burial, honoring the life of Armella M. Bueckers, age 95 of Albany, will be 10:30 AM, Wednesday, November 8 at the Seven Dolors Catholic Church in Albany.  Burial will be in the parish cemetery.  Armella died Friday, surrounded by her family and friends at the Mother of Mercy Campus of Care in Albany.  There will be a visitation from 4-8:00 PM Tuesday and again after 9:30 AM Wednesday at the church in Albany.  Seven Dolors parish prayers will be at 4:00 PM Tuesday at the church.  Seven Dolors Christian Mothers will pray the rosary at 10:00 AM Wednesday in the church.  Arrangements are being made by the Miller-Carlin Funeral Homes.

Armella was born March 12, 1922 in Zion Township to Ludwig and Bertha (Miller) Roehrl.  She grew up in Melrose and married Herman Bueckers on November 23, 1943 in the St. Boniface Catholic church in Melrose.  The couple farmed near Freeport until 1957 when they moved into Albany.  Armella had a 29 year career as a Certified Dietician with the Mother of Mercy Campus of Care.  She retired in 1992 at the age of 70.  From her time working and the one year she lived at Mother-of-Mercy, the staff became her extended family.  She was a member of the Seven Dolors Catholic Church, the Seven Dolors Christian Mothers, and the Waite Park American Legion Post 428 Auxiliary.

She is preceded in death by her parents, her husband Herman in June of 1974, grandson, Joseph Bueckers, great-grandchild, Brady Rademacher, and her sister, Viola Humbert.

The family would like to give a special thank you to the staff at the Mother-Of-Mercy Campus of Care in Albany.

The Mass of Christian Burial will be 10:30 AM, Wednesday, November 8 at the Seven Dolors Catholic Church in Albany. Burial will be in the parish cemetery.