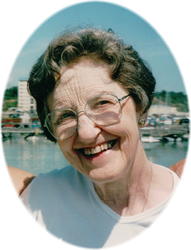 The Mass of Christian Burial, celebrating the life of Bernadette M. Lauer, age 80, will be 11:00 AM Friday, September 10, at the Sacred Heart Catholic Church in Freeport.  Burial will be in the parish cemetery. Bernadette died Tuesday at the St. Cloud Hospital.  Friends may call after 10:00 AM Friday at the church.  Arrangements are being made by the Miller-Carlin-Brenny Funeral Home in Albany.Bernadette was born February 8, 1930 in Freeport to Ferdinand and Catherine (Kerfeld) Meyer.  She grew up in Freeport.  She graduated from Cathedral High School and later she completed two years of nurses training.  She lived in Howard Lake from 1959 until 1985 when she moved to Waverly.  In 2008, she moved to St. Cloud.  Bernadette was an LPN at the Winsted Nursing Home for many years.  She will be fondly remembered for her great home cooking, especially pies and cookies and her skill with any wild game cuisine.  Her love of gardening has been passed on to her children.  She was a member of the St. Mary’s Catholic Church in Waverly, where she had been very active over the years.  She was known as a care giver to all.Bernadette is survived by her children, Deborah (Jim Hunt) Lauer, Montamedi; Douglas (Carol) Lauer, St. Paul, Mark (Mary) Lauer, St. Paul; Joan (Tim) Golden, Mequon, WI; Chris (Anissa) Lauer, Viking; daughter-in-law, Deborah Lauer, Annandale; 16 grandchildren and 3 great-grandchildren.She is preceded in death by her parents, her son, William; and her brothers and sisters, Loretta Kollman, Joe Meyer, Margaret Lauer, Evelyn Rodemacher, Al Meyer, Marie Moscho and Sr. Mary Jude Meyer, OSB.

There will be a one hour visitation starting at 10 AM and going until the time of service at Sacred Heart Catholic Church in Freeport on Friday, September 10, 2010

The Mass of Christian Burial, celebrating the life of Bernadette M. Lauer, age 80, will be 11:00 AM Friday, September 10, at the Sacred Heart Catholic Church in Freeport. Burial will be in the parish cemetery.