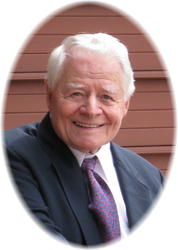 Mass of Christian burial celebrating the life of Bernard “Bernie” John Schneider, age 83 most recently living at Lyngblomsten Care Home in St. Paul will take place at 11AM, Saturday, April 5th 2014 at Seven Dolors Catholic Church in Albany, MN.  Father Cletus Connors OSB will officiate and a private family burial will take place at a later date at St. Mary’s Cemetery in Breckenridge, MN.  Bernie died peacefully at St. John’s Hospital in Maplewood with his family by his side.  There will be a one hour gathering prior to the mass in the gathering hall at the church.  Arrangements are being made with the Miller-Carlin Funeral Home of Albany.Bernard was born April 26, 1930 to Joe and Catherine (Fleming) Schneider in Breckenridge, MN., the eldest of their seventeen children.  Bernie grew up helping on the family farm and graduated from Breckenridge High School.  He went on to pursue a life-long career in sales.  Bernie was known to his family and friends as an ardent Green Bay Packers fan and a terrific card player who dearly loved good times with family and friends.Bernie is survived by his four daughters from his first marriage to Evelyn Marco; Jackie, Janice, Mary Jo, and Jeanne, all of Cedar Rapids, Iowa; from his second marriage to Joyce Bebee he is survived by his daughter Luree of St. Paul and his step-daughters Tammy and Dawn; his twelve grandchildren; 11 great-grandchildren; and his siblings Dennis, Rita, Kathleen, Laurel, James, Ruth Anne, Anita, Lynda, Barbara, Colleen, Jane, and Ted; along with many nieces and nephews.  He is also survived by his beloved friend, Pat Kaiser.He is preceded in death by his parents Joe and Catherine Schneider, his daughter Jerri Lynn, and his four brothers Michael, Lawrence, Daniel, and Kenneth.

There will be a one hour gathering prior to the mass on Saturday, April 5th at the church in Albany

I will miss you so very much. We have shared so many years together, growing up as the eldest boy and girl in our ever growing family. My memories of you were always good. You were such a kind and gentle person. I am so grateful that we had these last years together and that I could come and spend time with you. I hope you are at peace and someday we will be together again.

I remember Bernie coming to our house in Bruce Crossing. I was pretty small at that time but I remembered his humor, and when I saw him at the family reunion He still had the great humor.

I have memories of Easter egg hunting at your house when I was a little girl. I hope you are at peace Grandpa and our family will be together again in Heaven.