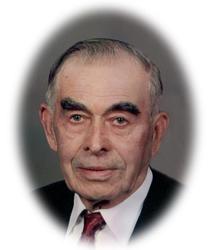 BERNARD FRANCIS THELLJuly 2, 1919 – March 7, 2010The Mass of Christian Burial celebrating the life of Bernard F. Thell, age 90, of  Upsala will be 11:00
AM Thursday at the St. Francis of Assisi Catholic Church in St Francis.  Burial will be in the parish
cemetery.  Bernard died Sunday at the St. Michael’s Hospital in Sauk Centre.  Friends may call from
4-9:00 PM Wednesday and again after 10:00 AM Thursday at the church in St. Francis.  St. Francis
of Assisi parish prayers will be at 8:30 PM Wednesday evening at the church.Bernard was born July 2, 1919 in St. Francis to John and Mary (Gruidl) Thell. Bernard grew up on
the family farm in Krain township.  He married Marie Voss in 1942.  Marie died in 1943.  Bernard
married Eleanor Voss on October 16, 1945 in Melrose.  The couple farmed together on Bernard’s
homestead farm until 1987 when they moved to Holdingford.  In 1992, they moved to Upsala and
most recently, Bernard has been a resident of the nursing home in Sauk Centre.  Bernard was a
member of the St. Francis of Assisi Catholic church and the Men’s Society of the St. Francis of Assisi
Church.Bernard is survived by his wife, Eleanor Thell, Albany; his children; Betty (Al) Hartung, Avon; Roger
(Kathy) Thell, Albany; Kathleen (Elmer) Goebel, Albany; Bernice (Donald) Schmidt, Freeport;
Eleanor (Sylvester) Tschida, Upsala; Robert (Sharon) Thell, Freeport; Terry (Nancy) Thell,
Holdingford;   40 grandchildren and 52 great-grandchildren.Bernard is preceded in death by his parents, his first wife, Marie, an infant daughter;  his sisters, Ann
Dankbar, Kathryn Stueve and Rose Fuhrmann;  his brothers, Alois Thell; Mike Thell, William Thell,
John Thell and an infant brother.

The Mass of Christian Burial celebrating the life of Bernard F. Thell, age 90, of Upsala will be 11:00 AM Thursday at the St. Francis of Assisi Catholic Church in St Francis.

Our deepest sympathy on the passing of Bernard. Your loss is Heavens gain.

We Care.
Love
Julian and Mae