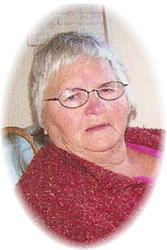 The Mass of Christian Burial celebrating the life of Bernice M Czech, age 78, of Holdingford
will be Thursday, April 29, 2010 at 11:00AM at St Hedwig’s Catholic Church in Holdingford.
Fr Gregory Ombak will officiate and burial will take place in the parish cemetery following the
service.  Friends may call from 5-9pm on Wednesday April 28 and again prior to the service
from 9:30-11am on Thursday.  St Hedwig’s Altar Rosary and Christian Mothers will pray at 6:15
and parish prayers will be at 7 at the church on Wednesday.  Bernice peacefully died Sunday in
her home surrounded by her family and puppies.  Arrangements are being made with the Miller-
Carlin Brenny Funeral Home in Holdingford.Bernice was born on September 22, 1931 in Freeport to Elizabeth (Denk) and Arthur Wiswell.
She married Nick Czech on June 3, 1952 in St Francis.  After marriage Bernice moved to the
farm where she was a loving mother and home-maker for many years.Bernice is survived by her children Michael (Carolyn) Czech, Kaysville, UT; Laurette (Laurie)
Quistorff, Sauk Centre; Kathy Czech, Holdingford; Jackie (Jeffrey) Middendorf, Grey Eagle;
Guy Czech, Holdingford; Terry (Judy) Czech, Cold Spring; Becky Czech, Sauk Centre; Hydie
Czech, Holdingford.  She is also survived by her grandchildren Randy and Nicole Quistorff,
Michael and Lisa Czech, Travis and Trevor Middendorf and one great-grandson Skyler Czech.Bernice was  preceded by her husband Nick on February 27, 2001.  She was also preceded by her
brothers and sister Margaret Notch, Albert Wiswell, and Arnold Wiswell, and son-in-law Wayne
Quistorff.

Friends may call from 5-9pm on Wednesday April 28 and again prior to the service from 9:30-11am on Thursday. St Hedwigs Altar Rosary and Christian Mothers will pray at 6:15 and parish prayers will be at 7 at the church on Wednesday.

The Mass of Christian Burial celebrating the life of Bernice M Czech, age 78, of Holdingford will be Thursday, April 29, 2010 at 11:00AM at St Hedwigs Catholic Church in Holdingford.

I am so saddened to hear of your loss. Just knowing you, Becky, I know what a Special and Wonderful Woman, Bernice was. We understand your Mother had been ill for quite some time. Never the less, we are always saddened when our loved ones leave us. May it bring you comfort to know Bernice is now in the arms of our Heavenly Father. I will pray for your entire Family.

Becky and family, May God bless you with peace of mind and soul during this difficult time. Becky your friends are thinking of you and we are hear for you if you need a shoulder to cry on, a hug or just a listening ear. Theresa

Becky,
I was so sorry to hear about your Mother, my thoughts and prayers are with you and your family.

My heartfelt sympathy goes out to you and your family. There is a new angel in heaven to watch over us now and her spirit will live on in your heart as she continues to lovingly care for for her children, grand children and great grand child. My prayer is that God will give you great peace in knowing you were at her side at the time she met Jesus. Your devotion and love for her has touched my life.

I am so sorry for your loss. It is always so hard to accept. Just know that your friend on the other side of the wall is here for you.

Becky,
I am sorry for your loss. It is always so difficult to understand. Just know that your friend on the otherside of the wall is here for you.

BERNICE.(THE BEST AUNT IN THE WORLD) WILL BE MIST VERY MUCH. SHE WAS LIKE A MOTHER TO ME AND FOR THAT I WILL ALWAYS MISS AND LOVE HER FOREVER. YOUR NEPHEW (KEVIN) RIP…….