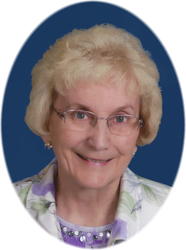 Betty Jean Werckman, 78 of St. Cloud, passed away peacefully on Saturday, November 28, 2015 at Quiet Oaks Hospice House in St. Augusta, MN after a short illness.  Visitation will be at Miller-Carlin Funeral Home in St. Cloud from 4:00-8:00 on Tuesday, December 1, 2015 with parish prayers at 6:00 PM.  Family and friends may gather again on Wednesday after 10:00 AM until the time of service at the church.  Mass will be held at Holy Spirit Catholic Church in St. Cloud at 11:00 AM on Wednesday, December 2, 2015 followed by entombment at Assumption Cemetery Mausoleum in St. Cloud.

Betty was born in Milaca, MN on January 31st, 1937 to parents Carl and Bernice (Strumwall) Sandeen of Foreston, MN.  She graduated from Milaca High School in 1955.  On July 26, 1958 Betty married Robert Werckman at St. Louis Catholic Church in Foreston.  Betty worked as a secretary in the Milaca area for several years and during that time had four children.  In 1974 the family moved to Foley where Betty began working for Benton County Social Services where she remained until her retirement in 1999.  After the death of her husband Robert in 1999, Betty married Will Haberle in 2001 at St. John’s Catholic Church in Foley, and the couple lived in St. Cloud, MN and also had a home in Barefoot Bay, Florida for many years.  Betty and Will were very active together during their retirement years and spent a lot of time with their friends and families.  Betty loved to travel, dance, play cards and was an avid golfer.  She was a member of Holy Spirit Catholic Church in St. Cloud and was very active in her church community.

Betty was preceded in death by her parents, husband Robert Werckman, and step-granddaughter Mandy Wolak.

Betty’s family would like to thank all of the doctors, nurses and care-givers at Abbott Northwestern Hospital in Minneapolis, and Quiet Oaks Hospice House in St. Augusta for all of their efforts and support during her final days.

There will be a visitation for family and friends from 4:00-8:00 on Tuesday, December 1, 2015 at Miller-Carlin Funeral Home in St. Cloudwith parish prayers at 6:00 PM and againafter 10:00 AM Tuesday until the time of service at the church.

MAY YOU REST IN PEACE, AND ENJOY YOUR ROCKING CHAIR, GOD MADE JUST FOR YOU.