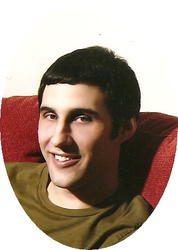 Brian J. LeykAge 27 of Hopkins, Formerly of St. AugustaOctober 24, 1982 – March 27, 2010Private services were held on Tuesday for Brian J. Leyk, age 27 of Hopkins, formerly of St. Augusta. Brian died at his home in Hopkins on Saturday, March 27, 2010.Brian graduated from Cathedral High School in 2001 and graduated Summa Cum Laude from St. Cloud State University in 2005 with a degree in Computer Science. He worked for LSS Data Systems since earning his degree.Brian was born October 24, 1982 and he grew up in St. Cloud and St. Augusta with his parents; Michael James and Mary Jean (Kuklok) Leyk and his older brother, David Michael Leyk. Besides his parents and brother, Brian is survived by his grandparents, James and Shirley Leyk of Waite Park, special aunt and uncles; godparents, Joan (Kuklok) LaBelle and Christopher LaBelle, and Scott Leyk, as well as many other aunts, uncles and cousins that loved him and will miss him dearly. He is also survived by numerous friends that cared about him and supported him. Brian chose his own time to leave this world, unable to fully absorb the love and caring of his friends and family. He desperately wanted to stop his emotional suffering of this world.Brian was preceded in death by his maternal grandparents, John and Georgene (Jansen) Kuklok and one aunt.

Brian was wonderful person. I knew him in highschool and he was always kind to me.

My thoughts and prayers are with you at this difficult time. Take-care!

Our thoughts and prayers are with your family

I worked with Brian at LSS for almost 3 years. He was a great guy who was fun to be around and made me laugh on several occasions. He will be missed. My thoughts and prayers are with the family.

Just heard today. Brian was one of my best friends in high school. I will always cherish the fun times we had playing video games in the basement during hot summer days. My thoughts and prayers are with you Leyk family…

Brian will always remain a close friend to me in my heart and I will treasure all the good times we have had. You will be missed.

Really sorry to hear about Brian. Our thoughts and prayers are with you.

Brian was a very kind and thoughtful person. I had the privilege of working with him at LSS where his brilliance and dedication were inspiring. My thoughts and prayers are with you.

I was moved by the beautiful words in the obituary as I read them in the St. Cloud Times. I know how suicide can be so difficult to acknowledge especially in someone so young and very much loved. The courage you showed in your honesty was and is remarkable. Thank you. May you and all your family fund peace.

I worked with Brian at LSS. I’m sure you know he had a unique, quirky, but unoffensive sense of humor. It came through even when he was writing an email about something work related. He almost always made me chuckle with the way he phrased things. He was also extremely intelligent, passionate about his work and considerate. When he’d stop by my desk to ask a question, he would always end the conversation with, “Thank you for your time.”

I’m very sorry for your loss.

Mary,
I am so saddened to hear about your son. I hope you find comfort in fond memories and the support of those around you.

Mary, Michael and David-
Loving thoughts and prayers for you as you deal with the loss of Brian.

I attended high school with Brian. Although I did not know him well, my heart goes out to him for the pain he must have been in and for his family during this difficult time. I will keep your family in my prayers. May God’s love shine upon Brian and give him peace.

Mike, Mary and David,
You are in our thoughts and prayers! We know Brian will find peace!

I knew Brian from working at LSS. Brian was so enjoyable to be around, he always had a smile on his face and made everyone around him laugh. He was so easy to approach and talk to, an excellent conversationalist. He had a very unique way of thinking about things, making him successful in all that he did.

I am deeply saddened for the pain that he felt inside and pray that his friends and family left behind will find peace during this difficult time.

You don’t know me but a year ago on March 23, 2009 I lost my niece to suicide and it has been a very difficult time for all of us. I just want you to know that I understand what you are going through and I will keep you in my prayers. Remember what are memories of Brian have now become treasures. Love Lucy

I am so sorry for your loss, my thoughts and prayers are with you

Brian was my close friend when I lived in St.Cloud. Him, David, and I had some good times together! I will always remember his funny, out bursting laugh! It was great!

Peace be with you, Brian. I’m sorry we could not help.