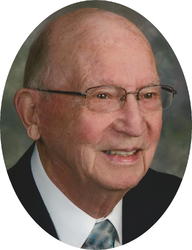 The Mass of a Christian Burial, celebrating the life of C. Ray Hughes, age 93 of St cloud, will be 11:00 AM, Friday, January 9 at the Church of the Holy Spirit in St. Cloud.  Burial will be in Assumption Cemetery.  Ray died at his home on January 3.  Visitation will be from 4-7:00 PM Thursday, January 8 at the Miller-Carlin Funeral Home in St. Cloud, and again after 10:00, Friday at the church.  Holy Spirit parish prayers will be 5:00 PM Thursday evening at the funeral home in St. Cloud.

Ray was born November 27, 1921 in Robbinsdale, Minnesota to Floyd and Jennifer (Holmes) Hughes.  He married Lillian “Lil” Dahlheimer on January 25, 1943 in Hawaii.  The couple moved to St. Cloud in the mid 1940’s when Ray accepted a position of Plant Manager at the new Franklin manufacturing company.  He worked there until 1964 when he joined Dairy Craft Inc. (later DCI) as Executive Vice President, and retired in 1988.

Ray’s accomplishments in Central Minnesota include Past President of the:  St. Cloud Chamber of Commerce; Minnesota Association of Commerce and Industry and the Exchange Club; and General Chairman of the local Knights of Columbus.   He spent many years volunteering with the Stearns County Red Cross serving as County Chairman and was a long standing member of the executive board.  In retirement, his interests have focused on his grandchildren, charitable organizations including Treasure Chest and the St. Benedict’s Senior Living Community. His passion for golf spanned over 50 years as a member of the St. Cloud Country Club.

Ray is survived by his children; Mark Hughes, Grosse Pointe, MI and Mary Jo (John) Becher, Houston, TX.  He is also survived by his brother Roger (Nanette), Minneapolis and four grandchildren: Bryan, Eric, Kevin and Alexa.   He is preceded in death by his parents, his wife, Lil on July 28, 2004, his brothers Glen and William Hughes, and sisters, June Simmons and Jane Kovalcyzk.