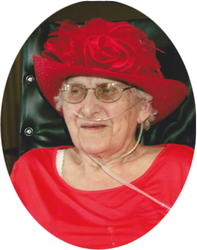 Mass of Christian Burial celebrating the life of Clara Schlueter, age 89, of Albany, will be at 11:00 AM on Saturday, July 16, 2016 at the Seven Dolors Catholic Church in Albany.  Fr. Cletus Connors, OSB will officiate and burial will follow at the Our Savior’s Lutheran Cemetery where she will be reunited her with her husband.  There will be a visitation for family and friends after 9:30 AM until the start of mass Saturday morning.  Arrangements are being entrusted to the Miller-Carlin Funeral Home, Albany.

Clara was born on February 5, 1927 to Anton and Elizabeth (Blonigen) Jochum in St. Cloud.  She grew-up with five siblings and spent her life in the area.  On October 11, 1947, she married John Schlueter in Albany and their family was completed by the birth of two daughters.  Shortly after the birth of her first daughter, Clara suffered a stroke and became partially paralyzed on one side.  She refused to be identified by her disability and her independent nature flourished.  Clara was very strong-willed and sweet woman.  She is remembered for being a gracious hostess who thrived on county life, laughter, and love.  Clara was a good cook, talented baker, and a wonderful mom.  She enjoyed close relationships with her siblings and encouraged her children and younger family members to be themselves.  Clara was a lifelong member of Seven Dolors Catholic Church.

She is reunited in Heaven with her husband John who died on Feb. 4, 1996, her daughter Kathy Christman and grandson Ian Christman who died on July 25, 1985, her parents Anton and Elizabeth, her sisters Christine Hoffarth, Alma Husmann, and Marcella Buttweiler, and her brothers Leo Jochum and Walter Jocum.