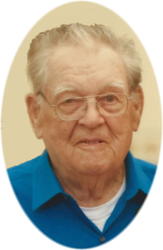 Mass of Christian Burial celebrating the life of Clarence A. Groetsch, 91, of Albany will be at 12 NOON on Thursday, November 6, 2014 at Seven Dolors Catholic Church in Albany.  Father Cletus Connors, OSB will officiate and entombment will take place in the parish cemetery.  Clarence passed away peacefully at his home Sunday.  There will be a visitation from 4:00-8:00 PM on Wednesday, November 5, 2014 at the Miller-Carlin Funeral Home in Albany and again after 11:00 AM on Thursday at Seven Dolors.  Parish prayers will be at 4 PM Wednesday evening at the funeral home.  Arrangements are being made with Miller-Carlin Funeral Home, Albany.

Clarence was born May 13, 1923 to Anton and Susan (Kammers) Groetsch in Albany on a family farm.  He grew up in the area with his nine siblings.  Clarence had to grow up quickly after the death of his father and learned the ways of the farm.  He married Rita Poxleitner on June 30, 1948 and together they raised eight children and cultivated a sense of family.  Clarence was a proud and independent farmer who loved John Deere equipment, enjoyed checking his crops, and loved his family.  He has left a strong family legacy after caring so long for his children, who he always made sure were supported, cared for, and loved.  Clarence was often seen driving around to check up on his children and is described as being compassionate and loving.  He was an honest and reliable man who valued education and liked to read.  Clarence enjoyed going up north to the cabin, and enjoyed trapshooting, fishing, and hunting.  He had a sharp mind, and always knew what was going on with his family.  Clarence could often be found at Paul’s Pair-A-Dice having a Diet Pepsi, visiting with friends, and playing cards.  He enjoyed talking politics and was concerned about world affairs.  He was an active member of Seven Dolors Church and the Albany Sportsman Club, to whom he donated land.

There will be a visitation from 4:00-8:00 PM on Wednesday, November 5, 2014 at the Miller-Carlin Funeral Home in Albany and again after 11:00 AM on Thursday at Seven Dolors. Parish prayers will be at 4 PM Wednesday evening at the funeral home.

Tears came to my eyes when I read Clarence’s obituary. I have many fond memories of your Dad that I will always treasure. I was fortunate to grow up with the example of Clarence and Rita and their love for their children. You are in my thoughts and prayers.

Please accept my heartfelt condolences on your loss.  My memories of Uncle Clarence especially from my childhood will always be in my heart.  Rest in Peace and God Bless you, Uncle Clarence.  Love, Cindi & Bud