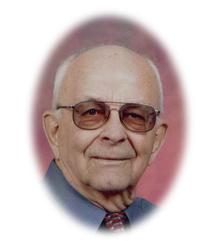 CLARENCE (CLAREY) SCHUELERJanuary 1, 1923 – January 21, 2011The Mass of Christian burial, celebrating the life of Clarence “Clarey”  Schueler, age 88 of Holdingford, will be held 11:00 AM, Wednesday, January 26 at St. Hedwig’s Catholic Church in Holdingford.  Burial will be in the parish cemetery.  Clarence passed away Friday afternoon at his home, surrounded by his loving family.  Visitation will be from 9:30 AM until the time of service Wednesday at the church in Holdingford.  Arrangements are being made by the Miller-Carlin-Brenny Funeral Home in Holdingford.Clarence was born January 1, 1923 in St. Paul to Herman and Lillian (Gerads) Schueler.  He attended elementary and high school in St. Paul.  He served in the U.S. Army Air Corp from 1943- 1946.  Clarence married Lucille Scepaniak on August 20, 1947 at St. Hedwig’s Catholic Church in Holdingford.  He worked 39 years at Holdingford elementary and high school as a custodial engineer, 17 years as a bus driver and was Holdingford City Clerk for many years.  He was an avid fisherman and duck hunter.  He enjoyed home gardening and family camping trips at Scenic State Park in the Big Fork area.  Clarey was a member of St. Hedwig’s Catholic Church and a devoted member of the church choir for over fifty years.  He also was a member of the Knights of Columbus, Holdingford VFW and the Stearns County Historical Society.Clarence is survived by his children, Carol, (Glen) Greener, Albany; Peggy Schueler, Colorado Springs, CO; Jerry (Kathy) Schueler, Holdingford; and Nancy (Danial) Bieniek, Holdingford.  He is also survived by his grandchildren; Jackie, Beth, Mike, Emily, Tim, Laura, Liana, Jon, Lindsey, Gabrielle, Benjamin and Luke and great-grandchildren, Kaydance, Jenna and Alexis.  He was preceded in death by his wife, Lucy in 1990, his parents, Herman and Lillian Schueler, his brothers, Frank Schueler and Ben Schueler and his sisters, Irene Saturnini and Mary DeLadi.Memorials are preferred.

Our sincere condolences to the family for your loss.