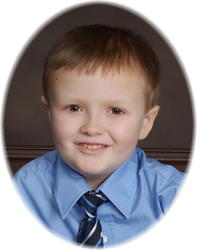 Heaven has another angel – after a long and hard fight against a rare cancer, Connor Rohde passed from this life to the next enveloped by the love of his family early Wednesday morning at home.  Funeral services celebrating Connor and his life will be at 11:00 AM on Thursday, August 18, 2016 at Holy Cross Lutheran Church in St. Cloud.  Pastor Paul Dare will officiate the funeral.  The family will receive visitors from 4:00-7:00 PM on Wednesday, August 17 at the Miller-Carlin Funeral Home in St. Cloud and again after 9:30 AM until the time of the service Thursday morning at the church.

Connor was born on October 17, 2008 to Adam and Kristin (Geiselhart) Rohde in St. Cloud.  He was greeted by an older brother Aiden and the two stole the hearts of everyone they met.  Connor was a bright and sweet boy who had completed 1st grade at Madison Elementary.  He was mature, an old soul, and so insightful for his age.  Connor loved life and loved people even more; admired his big brother, and liked telling jokes.  Music was another love of his.  He liked to dance, sing karaoke, loved the song “Everything is Awesome,” and everything Taylor Swift.  Connor enjoyed Legos, the Lego Movie, and Lego Batman.  He was such a sweet little boy who would notice and compliment folks on their accessories, much like the silly socks he often sported.  Connor was an indoor kind of guy who dreamed of being a chemist.

Surviving Connor are his parents Adam and Kristin and his brother Aiden.  Also surviving him are his grandparents Ronald and Laurel Geiselhart, Raymond Rohde, Linda and Paul Stanley; his great-grandparents Mavis and Robert Schwartz; his aunts and uncles, his cousins, as well as countless other family and friends who will miss him dearly.

Visitation will be from 4:00-7:00 PM on Wednesday, August 17 at the Miller-Carlin Funeral Home in St. Cloud and again after 9:30 AM until the service at Holy Cross Thursday morning.

Funeral Services will be at 11:00 AM at Holy Cross Lutheran Church in St. Cloud.

I am so sorry to hear about Connor.  My heart breaks for your loss of this wonderful son and brother.  I have fond memories of Connor.  He was very kind and had such an amazing attitude.  I know he will be watching over all of you from heaven.  Aiden, you were such a great bid brother and I know Connor admired you!  I am sending all of you a big hug.  God be with all of your family during this difficult time.

Thinking of you all always. Connor was a light to all paths he crossed. We feel so lucky to have met him. Peace and comfort in the upcoming days and months.

Words cannot express the sadness your family is feeling now.  We are praying for all of you.. Connor is loved by so many people and he gave much to this world. We are sorry for your loss but know he will always be with you. Peace to you mow at this difficult time.