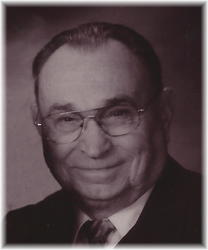 The Mass of Christian Burial, celebrating the life of  Conrad J. Locnikar, age 93 of Albany, will be 11:00 AM, Monday, November 3, 2014 at Church of The Seven Dolors in Albany.  Father Cletus Connors will officiate and burial will be in the parish cemetery.  Conrad died at the St. Benedicts center in St. Cloud.  There will be a visitation from 4-6:00 PM Sunday and again after 10:00 AM Monday at the Seven Dolors Parish Center.  The Knights of Columbus will pray at 5:30 PM followed by Seven Dolors Parish Prayers at 6:00 PM Sunday evening at the parish center in Albany.  Arrangements are being made by the Miller-Carlin Funeral Home in Albany.

Conrad was born December 7, 1920 in Albany to Conrad and Ottilia (Kubicek) Locnikar.  He lived all of his life in the Albany area.  He married Genevieve Ebensteiner on June 28, 1948 in Albany.  Conrad worked for the lumber yard in Albany then started driving bulk milk truck for the Albany Creamery.  He also worked as a butter maker for the creamery.  After retiring, he worked for the Minnesota Highway Department maintaining the rest stop in Avon.  He was a member of the Seven Dolors Catholic Church and the Knights of Columbus.

He is preceded in death by his parents, 4 sons, Francis, Gerald, Michael and Eugene; one granddaughter, Kay Thompson; and his brothers, Gergory Locnikar; Florian Locnikar; LeRoy Locnikar and Ervin Locnikar.

I am so sorry for your loss!  You are all in my prayers for peace and wonderful memories.

I was saddened to hear of the death of your beloved Father. I have so many wonderful memories of him, your Mother and siblings growing up.  Please extend my heartfelt condolences to all.  You are in my prayers.