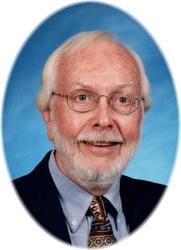 Services celebrating the life of Dale Lawrence Swanson, age 83, of Waite Park, will be at 11:00 AM Friday, January 11, 2013 at the Bethlehem Lutheran Church in St. Cloud.  Pastors Dee Pederson and Stephen Cook will officiate and inurnment will take place immediately following the service.  Dale passed away early Saturday morning on December 15, 2012 at Quiet Oaks Hospice House after an eight year battle with cancer.  There will be a visitation one hour before the service at the church.  Arrangements are being made with Miller-Carlin Funeral Home in St. Cloud.Dale was born on November 1, 1929 to Borghild (Hanson) and Lawrence Swanson in Mankato and spent his boyhood there.  His education included a Bachelor of Science in Speech and Theatre from Mankato State University, a Master of Arts in Theatre from the University of Wisconsin, and post-graduate work at the University of Minnesota.  Dale taught for forty-three years, beginning in the high school in Fairmont, Minnesota and continuing at the University of Wisconsin, the University of Minnesota, and in Robbinsdale and Cooper High Schools in Robbinsdale, Minnesota, the school district where he was known for his direction of musicals.  In 1966, Dale joined the Department of Speech and Theatre at St. Cloud State University where he taught for twenty-six years.  During his tenure there, Dale chaired the Department of Theatre for several years and initiated the Film Studies program.  Always interested in travel, he taught in St. Cloud State’s Denmark program, and between the years 1979 and 1984, he led four fine arts tours to Europe.  In 1987, he accompanied an SCSU production of The Wizard of Oz to China.  After his retirement in 1992, Dale and his wife, Gretchen, enjoyed traveling throughout the United States, spending winter months along the coastal areas, in their home in Tucson, Arizona, and later in Bella Vista, Arkansas.  He enjoyed summers at Big Fish Lake  near Cold Spring.He is survived by his wife of 62 years, Gretchen; daughters Debra McAlister and Tamara McClintock; grandchildren Jeremy (Paula) Heydman, Eric Heydman, Ian McClintock, and Molly McAlister; and great-grandchildren Colin and Ryan Heydman, and Lauren and Kendall Heydman.

Dale ~
I know you were looking down on your family Friday morning as they paid their respects and remembered a life well-lived. As a director, I hope you were proud that everything went smoothly, the music was beautiful, and the services flowed. As a family man, I hope you felt the love watching your great grandchildren sing for you one last time, hearing your only granddaughter’s voice lifted up for you, and hearing all the stories shared from those whose lives you touched. Rest in peace, you are a loved man and will be missed by many.
With love and sympathy to Gretchen … you are in our thoughts as prayers.
~ Shannon & the Boys