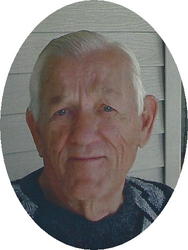 The Mass of Christian Burial, celebrating the life of Daniel “Dan” Kirick, age 93 of Sauk Rapids, will be 11:00 AM, Wednesday, October 14, at the Holy Spirit Catholic Church in St. Cloud.  Burial will be in Assumption Cemetery.  There will be a visitation after 10:00 AM, Wednesday until the time of services at the church. Dan died on October 7 at the Talahi Nursing Home.   Arrangements are being made with the Miller-Carlin Funeral Homes, St. Cloud.

Dan was born September 14, 1922 in the Ukraine.  He and his family moved to the United States in 1924 when Dan was just 2 years old, where he grew up in New Jersey.  During WWII, Dan was given permission to fly for the Royal Canadian Air Force.  After the war, Dan settled into farming in New Jersey.  He married Mary Mattern on September 27, 1952 in Newark, NJ.  After several years of farming, Dan and Mary moved to Trail Minnesota in 1973, than eventually moved to Sauk Rapids.

Dan is preceded in death by his parents, his wife, Mary in 2005; his brothers, Alexander Kirick, Walter Kirick and his sister, Olga Kirick.

The Mass of Christian Burialwill be 11:00 AM onWednesday, October 14, at the Holy Spirit Catholic Church in St. Cloud. Burial will follow in Assumption Cemetery.