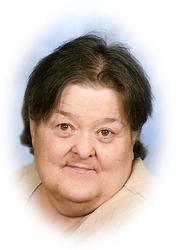 DARLENE M.. KUNSTLEBEN
July 13, 1951 – October 7, 2009The mass of Christian Burial, celebrating the life of Darlene M. Kunstleben, age 58 of Avon, will
be 10:00 AM Saturday, October 10th at Immaculate Conception Catholic Church in St. Anna.
Burial will be in the Arban Cemetery.  Darlene died Wednesday at her home in Avon.  There will
be a visitation from 4-8:00 PM Friday and again after 9:00 AM Saturday at the church in St.
Anna.  Immaculate Conception Christian Women will pray at 7:00 followed by parish prayers at
7:30 PM Friday at the church.  Arrangements are being made by the Miller-Carlin-Brenny Funeral
Homes. Darlene was born July 13, 1951 in New Ulm to Raymond and Anna (Sellner) Maidl.  She married
Ronald Kunstleben on May 31, 1975 in the Sacred Heart Catholic Church, Arban.  The couple
lived in the Avon area and Darlene was a homemaker.  She was a member of Immaculate
Conception Catholic Church and the Immaculate Conception Christian Women. Darlene is survived by her husband, Ronald, Avon; daughter, Stacey (Jon) Gobel, Elk River; her
brothers and sisters, Ronald (Leona) Maidl, Avon; Kathy (Tom) Van Hoorik, Apple Valley; Joyce
(Robert) Sieben, Avon; and Patty (Gerry) Horner, New Ulm.  She is also survived by her two
grandchildren. Darlene is preceded in death by her parents and her twin sister, Diane Finken.