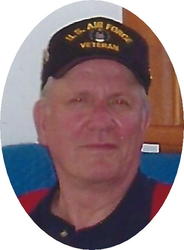 Dennis C. Nielsen, age 76, St. Cloud, died December 31 at the St. Cloud VA Medical Center.  Visitation will be Friday, January 8, 2016 from 4pm to 8pm at Miller Carlin Funeral Home in St. Cloud and 1 hour prior to the service at the church in Clearwater Saturday morning.  Funeral Services will be at 11am on Saturday, January 9, 2016 at Rejoice Lutheran Church, Clearwater, MN with Pastor Laurie Weis officiating.  Private family burial will be at a later date in the Minnesota State Veterans Cemetery, Little Falls.  Arrangements are being made by the Miller-Carlin Funeral Homes.

Dennis (Denny) Carl Nielsen was born July 26, 1939 to Henriette and Leslie Nielsen in Armstrong, Iowa.  Denny graduated from high school in Buffalo Lake, MN and joined the United States Air Force from 1959-1965 with the 551st  Strategic Missile Squadron.  On January 15, 1966 he was united in marriage to Ramona Jeanne Nelson at Our Savior’s Lutheran Church, Fairfax, MN.  Together they had three daughters Tracy, Cherise, and Dawn.  While in the Air Force, Denny started his teaching degree.  He finished his degree at St. Cloud State University, earning both a Bachelors and a Masters degree in Physical Science.  Denny taught 7th & 8th grade Science at North Junior High from 1967-1984 and Physics, Environmental Science, and Water Science at Apollo High School from 1984 until his retirement. He enjoyed teaching very much and, for years would take his students, along with other faculty, to Sand Dunes Wildlife Refuge and also his own property to have the students enjoy the wildlife and learn about environmental conservation.  Besides his teaching job, Denny had a summer concrete business, “Nielsen & Sons” which poured slabs at Airstream and several of the Travelers Country Clubs.  He also worked as the park manager at the Airstream Park in Clear Lake.

Denny was a master craftsman woodworker and many of his family and friends enjoyed gifts and furniture from his shop.  He also enjoyed fishing and taking his family camping trips in the summer to any state park.  He was especially fond of visiting Grand Marais to have Sven and Ole pizza.  One of his greatest joys was taking his grandsons on tractor rides on his International Harvester Model “A” tractor.  His other joy was being with his beloved Newfoundlands King and Thumper; whom his daughters believed he loved more than them.

Denny belonged to several organizations throughout his life. While teaching, he was a member of MEA, NEA, and the Central MN Science Teachers Association.  He also was an active member in the Clearwater American Legion, DAV, VVA, and Forty & Eight.  He was a long time volunteer at the St. Cloud VA and the Salvation Army.  His volunteer activities taught his daughters to care for those that were less advantaged.  He was an active member of Trinity Lutheran Church, Clear Lake and later assisted in the development and became a member of Rejoice Lutheran Church, Clearwater.

Denny’s family would like to extend a big thank you for the staff in Building 51-2 at the St. Cloud VA for their wonderful care, and also Jay Keller for his lifetime of friendship and daily visits until the end.

There will be a visitation on Friday, January 8, 2016 from 4:00-8:00 PMat Miller-Carlin Funeral Home in St. Cloud and again on Saturday, January 9, 2016 after 10:00 AM until the time of serviceat the Rejoice Lutheran Church in Clearwater.

Due to severe flower allergies in the Nielsen family, please do not send flowers. Memorials are preferred.

My prayers go out to all of you. I am very sorry for your loss. Love you guys! I’ll be praying for you in the days to come.

So Very Sorry To Hear This… Our thoughts & prayers are with you all!!!

Our condolences go out to the Nielsen family. Although we knew him very little we love Tracey and through her see what a wonderful man he was to have raised such a fine daughter. Our prayers are with you as you learn to navigate through life without him.

Jan and I extend our sympathy to your family at the passing of Denny. He was a great educator, husband, father and friend to all. May his memory bring comfort to each of you as you go through  these difficult times.

Dennis was a wonderful caring person!  Sorry we didn’t get to see each other more!  Rest in peace Dennis!

i love you uncle Denny!! You will be greatly missed by bunches as you have touched many in all you have done!!

Gary and I extend our condolescences to your family! You will be in our thoughts and prayers!

My deeptest sympathy to you Monie, Cherise, Tracy and Dawn…I did not see the obit and sorry was not on fb so did not know until just last night.  You are in my thoughts and prayers. May the comfort and love of Christ our Lord give each of you peace.  Love to each of you…