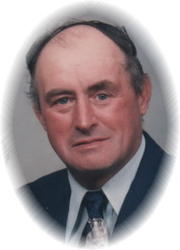 Mass of Christian burial celebrating the life of Duane Roy Carlson, age 80 of Upsala will be 1PM, Thursday, May 23rd 2013 at St. Mary’s Catholic Church of Upsala. Father John Odero will officiate and burial will take place in the parish cemetery following the service. Duane died peacefully surrounded by his family early Saturday morning at St. Gabriel’s Hospital in Little Falls after a sudden and unexpected illness. There will be a gathering prior to the mass from 11AM-1PM Thursday morning at the church. Arrangements are being made with the Miller-Carlin Funeral Home of Upsala.Duane was born June 1st 1932 in Holdingford to Roy and Mary (Marcinko) Carlson. The family later moved to a farm north of Upsala where Duane worked and lived the rest of his life. He married Judy Kramer on August 21, 1965 at St. Mary’s Catholic Church in Long Prairie. The couple lived on the family farm until recently moving into Upsala in 2012. Duane always had a passion for his time he got to spend working on the farm, however his greatest love in life was the time he got to spend with his family and grand children. He was a past member of the Farmers Union, the Upsala Historical Society, and St. Mary’s Catholic Church. Duane is survived by his loving wife Judy Kramer, Upsala; his children Robert “Bob” (Elaine) Carlson, Farmington; Lorelei (Mike Arndt) Carlson, Hudson, WI; Ron (Denise Gerads) Carlson, Upsala; Jeremy Carlson, Myrtle Beach, SC; Mike (Tamara) Carlson, Upsala; his grandchildren Justin, Tyler, Paige, Brittany, Abigail, Landon, Jordan, Keyona; and his sister Geraldine (Kenneth) Roemhildt, Waseca.He is preceded in death by his parents Roy and Mary Carlson, and is brother Virgil Ronald Carlson.

There will be a two hour gathering prior to the mass from 11AM to 1PM, Thursday May 23rd at St. Marys Catholic Church in Upsala

Mass of Christian burial celebrating the life of Duane Roy Carlson, age 80 of Upsala will be 1PM, Thursday, May 23rd 2013 at St. Marys Catholic Church of Upsala. Father John Odero will officiate and burial will take place in the parish cemetery following the service.

Judy and family – we are so sorry for your great and sudden loss. You all are in our thoughts and prayers.

Duane & Judy were very good friends of my mom; Duane was a very considerate man, and will be missed by lots of his friends and family. We’ll pray for his kind soul, and hopefully meet him in heaven!

Judy and Family, you are being held close in our thoughts, hearts and prayers. Our deepest sympathy.

We are very sorry to hear about Duane’s passing. We always enjoyed visiting with him. Peace and blessings to Judy and your family.