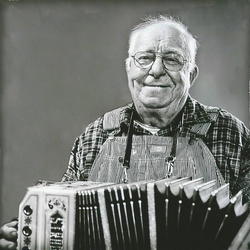 Mass of Christian Burial celebrating the life of Edmund “Ed” Fischer, age 89, of Albany, will be at 11:00 AM on Monday, July 11, 2016 at Seven Dolors Catholic Church in Albany.  Fr. Cletus Connors, OSB will officiate and burial will follow in the parish cemetery.  Ed died at his home as he wished on July 6, 2016.  His family will receive visitors from 4:00-8:00 PM on Sunday, July 10, 2016 in the Seven Dolors gathering space and again after 10:00 AM on Monday before mass.  Parish prayers will be at 4:00 PM Sunday evening at the church.  Arrangements are being made with Miller-Carlin Funeral Home, Albany.

Ed was born on August 16, 1926 to John and Susan (Fuchs) Fischer on their farm in Albany.  He grew up with seven siblings and graduated high school.  On October 16, 1946 he married Dolores Schunk at Seven Dolors Church and together they raised 8 children on the family farm.  Ed was a farmer his entire life and had dairy, hog, and crop farms.  He was a nature lover, was proud to cut and burn wood at his home, and was especially fond of lilacs.  Ed was one of the original board members of the Albany Farmer’s Union Co-op.  He was a resilient, honest, and hardworking man who was blessed to be married to his best friend for 62 years.  Ed enjoyed fishing, playing dice and card games.  He played the concertina, the harmonica, and was St. Nick to many families over the years.  Ed was a prayerful man and a lifelong member of Seven Dolors Church

Mass of Christian Burial will be at 11:00 AM on Monday, July 11, 2016 at Seven Dolors Catholic Church in Albany. Fr. Cletus Conors, OSB will officiate and burial will follow in the parish cemetery.

Our deepest sympathy to the entire Fischer Family.

Linda, Scott and family; my deepest sympathies in the loss of your father! I personally will miss seeing him in his pew at church. I know how deeply he missed your mom and now they are celebrating together with John. God bless you all! Celebrate the memories and share the stories! Blessings and prayers! Linda