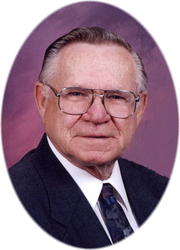 Funeral Services celebrating the life of Edward Ira Smith, age 85 will be 11 AM Thursday, April 14 2011 at Bethlehem Lutheran Church in St. Cloud.  Pastor Dee Pederson will officiate and burial will take place in the parish columbarium following the service.  Eddie passed away Sunday afternoon at the St. Cloud Hospital.  Friends may call from 5-8 PM Wednesday, April 13 at Miller-Carlin Funeral Home in St. Cloud and again from 10AM until the time of the service Thursday at the church.  Arrangements are being made with the Miller-Carlin Funeral Home of St. Cloud.Eddie was born January 13, 1926 to Lester and Enid (Huston) Smith in DeGraff, MN.  He grew up on the farm in the DeGraff area, and after his time in the service moved to St. Cloud where he lived the rest of his life.  Eddie served in the U.S. Army from 1944-1947 during WWII where he was combat wounded in the Philippians.  He married Corinne Skarsten on October 11, 1952 in Benson MN.  He worked in Nursing Services for the VA Hospital in St. Cloud for over 30 years before retiring in 1981.  Eddie greatly enjoyed life where he was not only an avid sportsman who enjoyed hunting and fishing but also cards, dancing, and playing ball. He was a member of the St. Cloud Legion, the VFW Post 428, was the past Commander of the Disabled American Veterans (D.A.V), and was also a member of the Bethlehem Lutheran Church in St. Cloud.Eddie is survived by his wife Corinne Smith, St. Cloud; his children David (Lu) Smith, Andover; Jerilyn Berc, Shoreview; Cheryl (Michael) Wedin, Clearwater; his siblings Lola Clemen, Benson; Beulah (Burt) Lundberg, New London; Perry (Joyce) Smith, Benson; Elenore Larson, Benson; Cecil Ellingson, Benson; Clifford Smith, Benson; 6 grandchildren, and 10 great-grandchildren.He is preceded in death by his parents Enid and Lester Smith, and his siblings Evangeline Smith, Thelma Stottler, Arline Stottler, Chester Smith, and Harold Smith.

Friends may call from 5-8 PM Wednesday, April 13 at Miller-Carlin Funeral Home in St. Cloud and again from 10AM until the time of the service Thursday at the church.

What a good man! He will be missed very much. Be assured of our prayers!

He was a wonderful uncle, say nothing of all the other things he was! I loved him and will miss him. His smile and sense of humor will never be forgotten!!

Great fishing partner and great uncle. Enjoyed the time we had together in the boat on Lake Mary and Blackwell.

Corinne and Family-
We sure enjoyed getting to know Eddie and could see by the summer family gatherings at Lake Mary that he had a very special family as well. What wonderful family memories you all will have of your father and grandfather. We will certainly miss him at the lake. Corinne you are in our thoughts and prayers at this difficult time. Take Care