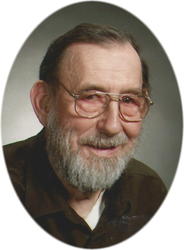 Services celebrating the life of Edward “Ed” Lemke, age 82 of Albany will be 11:00 AM Saturday, November 15, 2014 at Immanuel Lutheran Church in Farming.  Pastor Fred Kutter will officiate and burial will take place in the parish cemetery.  Ed passed away Tuesday at the Mother of Mercy Nursing Home in Albany.  There will be a visitation from 4-7:00 PM on Friday at Miller-Carlin Funeral Home in Albany and again after 10:00 AM Saturday at the church.

Ed was born September 3, 1932 in Albany to Theodore and Anna (Odenbrett) Lemke.  He lived his entire life in the Albany area.  He served in the US Army from June of 1956 until June of 1958 where he trained as a sharpshooter.  He married Eileen Little on September 7, 1968 in Elk River.  Ed worked at Kraft in Albany for 28 years; he eventually became the plant facilitator.  He retired in 1994.  Ed was a member of Immanuel.  He was a member of Immanuel Lutheran Church in Farming.

Ed is preceded in death by his parents.

Miller-Carlin Funeral Home in Albany and again Saturday at the church.