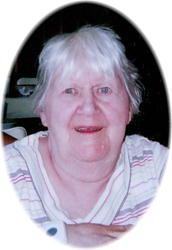 Mass of Christian burial celebrating the life of Eleanor Lydia Eggert, age 92 of Albany will be 12PM Thursday, October 3, 2013 at Seven Dolors Catholic Church in Albany.  Father Michael Naughton OSB will officiate, and burial will take place in the parish cemetery following the mass.  Eleanor died peacefully at Country Manor Nursing Home in Sartell Wednesday morning.  There will be a visitation prior to the mass from 10AM-12PM Thursday morning at the church in Albany.  Arrangements are being made with the Miller-Carlin Funeral Home of Albany.Eleanor was born on May 19th 1921 to Roger and Anna (Meyer) Westholter in Farming Township.  She married Werner Eggert in 1950.  The couple raised their twelve children together in Albany.  Eleanor worked as a mother and home maker raising her children and helped on the farm.  Eleanor had a talent for gardening and baking.  These talents where shown through her canned vegetables and delicious baked breads throughout the years.  She was a member of Seven Dolors Catholic Church in Albany.She is survived by her children Jeanette Stock, Shakopee; Albert Stock, Albany; Ruth (John Thomas) Eggert, Minneapolis; Irene (Mark) Christensen, Waterville; Tina (Randy Foster) Bautista, Toronto, Canada; Diane (Dan Vener) Forner, White Bear Lake; Karen (Larry Sampson) Eggert, St. Cloud; Grace Eggert, Avon; Werner “Butch” (Kathy) Eggert, Dayton; Nancy (Scott Warrington) Eggert, Cleveland, WI.; Linda Eggert, St. Cloud; her twelve grandchildren and eleven great-grandchildren; and her siblings Roger Westholter, Elk River; Lawrence Westholter, Elk River; Bernard Westholter, Elk River; Elizabeth (Robert) Robinson, Long Prairie; and Anna Marie Sieg, Milaca.She is preceded in death by her parents Anna and Roger Westholter, her first husband Albert Stock, her second husband Werner Eggert, her daughter Marcella Klein, and her brothers Raymond, Clement, and Nicholas Westholter.

There will be a visitation prior to the mass from 10AM-12PM Thursday, October 3, 2013 at the church.

Grandma,
Thank you for taking the time to be part of my life. I will never forget the memories visiting you on the farm…from helping in the garden and with chores, making playdoh, doughnuts, cookies and bread. The smell of waking up to cooked rice with cinnamon and milk. I will forever cherish those memories. I love you and will miss you greatly.

Mom,
I am so grateful to have had you in my life.You were always there for me. ..loving,caring and wanting the best for me. Growing up on the farm with all my brothers and sisters was a great life experience. We have so many memories!
I am sad that you had to go,but hope you are at peace and
I will never forget you as you will always be a part of me and forever in my heart. Love you Mom.
Your daughter,Ruth

Grandma,
I’m so glad that you were apart of my life. I will never forget when you called me a “Greaser” when I was putting lotion on you after your shower, the awesome poppyseed bread that you would make for the holidays and all the things that you had taught me growing up, like gardening, cooking, things about the farm, and the rocks you would collect because it was neat looking. Thank you for everything . I will miss you a lot !! I love you grandma!!!

To all of the Eggert Family: My thoughts and prayers are with you all. I have been remembering all the times my Mom, Dad, and Uncle Hank came to your home for visits. Sure is nice to have the good memories. Take Care!

I always enjoyed talking with aunt Elenore. She shed so much light on what life was like while she was growing up. She has left a great legacy of family to all her children, and others that knew her. Go in peace and know that your memory will be carried though the years by stories others will tell of you.