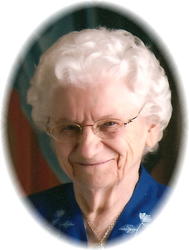 The Mass of Christian Burial, celebrating the life of Eleanor R. Solorz, age 88 of Elmdale, will be 11:00 AM Saturday, May 22 at St. Edward’s Catholic Church in Elmdale.  Burial will be in the parish cemetery.  Eleanor died Tuesday at the Country Manor Health Care Center in Sartell.  There will be a visitation from 4-9:00 PM Friday, May 21 and again after 10:00 AM Saturday at the church in Elmdale.  St. Edward’s Rosary Society will pray at 5:00 PM followed by St. Edward’s parish prayers at 7:00 PM Friday at the church.  Arrangements are being made by the Miller-Carlin-Brenny Funeral Home in Holdingford.Eleanor was born February 8, 1922 in Bowlus to Frank and Agnes (Opatz) Fussy. She has lived her entire life in the Bowlus, Upsala and Elmdale area.  She married Paul Solorz on May 29, 1945 in Bowlus.  Eleanor cooked for several priests and she also was a cook at the Bowlus Café.  She was a member of the St. Edward’s Catholic Church and the St. Edward’s Rosary Society.Eleanor is survived by her children, Renee (Ray) Opatz, Sartell and Jim (Rosie) Solorz, Elmdale.  She is also survived by her brothers and sisters; Alois (Eileen) Fussy, Bowlus; Walter (Mary Jane) Fussy, Bowlus; Jerome (Lila) Fussy, Bowlus; Marcella (Dominick) Marsolek, Rice; Irene Marsolek, Rice; 4 grandchildren, 6 great-grandchildren and 1 great-great-grandchild.Eleanor is preceded in death by her parents and her husband, Paul on September 30, 1977.The family would like to thank the staff at the Albany Hospital, St. Cloud Hospital, Country Manor Care Center and St. Cloud Hospital Hospice (especially Tammy and Wanda).