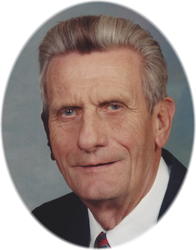 Elmer was born on March 29, 1929 to Frank and Elizabeth (Vos) Ebnet in Holding Township.  He grew up the youngest of 13 children, participated in football, basketball and baseball, and graduated from the local high school.  He went on to earn his Barber license in Minneapolis before returning to his hometown.  On November 23, 1950, he married Mary Ann Guck in St. Stephen and raised seven children with the love of his life.  Elmer joined the US Marine Corps and proudly served his country from 1951-1953.  Elmer loved his horses and enjoyed camping, fishing, and hunting.  He was a fun-loving man who enjoyed playing pranks, telling jokes, and chatting with his clients.  Elmer could talk to anyone, and he had been interviewed for numerous newspaper articles and a local book.  Elmer and Mary were featured in the book, Minnesota 13, and he also appeared in a documentary of Garrison Keillor.  He was huge supporter of high school and amateur sports his entire life and was fortunate to be able to support three generations of his family in their athletic pursuits.  Elmer played amateur baseball himself with the Sioux League in the 1940s.  He continued participating in sports into his later years, and boasted he hit his last homerun at the age 50 against a high school team.  In fact, he was up to bat with the bases loaded!  He was a man who dearly loved his community and is on the mural on the train car in town.  Elmer worked as a barber for 59 years, 50 of which were spent in Holdingford.  He was a Boy Scout leader and he was involved with the American Legion, the Commercial Club, and the school board.  He was an active member of St. Mary’s Church and sang in the choir for years with his wife.

He is greeted in Heaven by his wife Mary, his parents Frank and Elizabeth, his brothers Alfred, George, Nicholas, Leo, Ambrose, Roman, Joe, and infant Raymond, and his sisters Mary Zeis and Anna Dominico.

To all those who cared for Elmer over the last few years – we thank you.