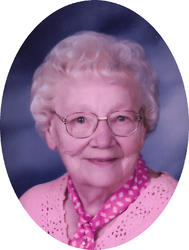 Elsie was born October 14, 1917 in Melrose, to Ben and Regina (Gieske) Von Wahlde. Elsie grew up in New Munich.  She married Edward Mergen on October 22, 1946 in New Munich.  The couple settled in Albany.  Elsie worked as a cook with the Albany Schools for several  years, retiring in 1982.  She was a member of the Seven Dolors Catholic Church, the Seven Dolors Christian women, the St. Ann’s Society, the Mother of Mercy Auxiliary and she was past president of the Albany American Legion Auxiliary.

She is preceded in death by her parents, her husband, Edward; her sister, Marie Worms, her brother, Clarence Von Wahlde and her granddaughter, Jennifer Mergen.

The Mass of Christian Burial will be 11:00 AM, Wednesday, November 29 at the Seven Dolors Catholic Church in Albany.