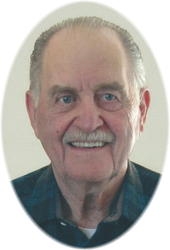 Emil was born on November 10, 1922 to Frank and Mary (Pueringer) Dullinger in Collegeville Township, MN.  Emil married Bernadette Leither on October 24, 1951 in Cold Spring.  He farmed near St. Joseph for many years.  He retired in 1984 and moved to Opole in 1992.  Emil enjoyed tinkering in the shop, fixing and inventing things, traveling, hunting, playing cards, and listening to the Albany radio station.  He especially liked playing the game of Mill.  He was a member of the Our Lady of Mt. Carmel Catholic Church in Opole.

He was preceded in death by his wife, Bernadette in 2012; infant daughter Maria; sisters, Laura Stommes, Anne Dullinger and brothers, Frank, Edmund, Matt and Claude.

I am Pat Doeden’s sister.  Just wanted to send my sympathy for the loss of your Dad.