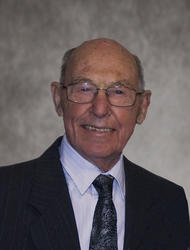 The Mass of Christian Burial, celebrating the life of Ervin Silvers, age 88, of Albany, will be 11:00 AM Wednesday, November 23, 2011 at Seven Dolors Catholic Church in Albany.  Burial will be in the parish cemetery.  Ervin died Friday at North Memorial Medical Center after a brief illness.  There will be a visitation from 4-9:00 PM Tuesday and again after 10:00 AM Wednesday at the Seven Dolors Parish gathering space.  Seven Dolors parish prayers will be at 4:30 PM followed by Knights of Columbus and the St. Joseph Society at 7:30 PM Tuesday at the church.  Arrangements are being made by the Miller-Carlin-Brenny Funeral Home in Albany.Ervin was born December 18, 1922 in Farming to William and Helen (Geisen) Silvers.  He married Rita Dingman on October 22, 1946 in Farming.  The couple farmed near Farming and then retired in Albany.  During his career as a farmer, Ervin was president of the Farming Milk Marketing Cooperative and the Albany Area Farmers Union; Secretary of the Stearns County American Dairy Board; Chairman of the Resolutions & Redistricting; Farmer’s Union; Milk Marketing; Secretary of the Minnesota Dairy Promotion Board; Director of the National Dairy Board; Chairman of the National Dairy Research Foundation; Director of the Federal Land Bank and Chairman of the Farm Credit Services.  Ervin was also active in his church, first at St. Catherine’s in Farming where he was on the parish council, sang in the church choir and the men’s choir; then at Seven Dolors where he was on the parish council, the building and repair committee and sang in the church choir and the funeral choir.  He was a member of the St. Joseph’s Catholic Aid Society where he served as President and Secretary and he was active in the Knights of Columbus where he was Financial Secretary, Recording Secretary, Deputy Grand Knight and Grand Knight.Ervin is survived by his wife, Rita Silvers, Albany; his children; Teri Meade, Beulah, WY; Ken (Arlene) Silvers, Sauk Rapids; Gil (Diane) Silvers, Sartell; Linda Schlangen, Cold Spring; John (Carol) Silvers, St. Joseph; Ann (Lynn) McClintock, St. Cloud; Joan (Rich) Ritter, Sartell; Dennis (Gerise) Silvers, Lonsdale; Donny Silvers, Albany; Gary (Lora) Silvers, Avon; Cindy (Bruce) Berghorst, St. Joseph; his sisters, Sr. Lillian Silvers, OSF; Rosie Rea, Farming; Helen (Bernie) Maurer, Little Falls; brother, Bill Silvers, St. Cloud; 29 grandchildren, 38 great-grandchildren and 4 great-great grandchildren.Ervin is preceded in death by his parents, his brothers, Andy Silvers, Ted Silvers, Robert Silvers, Ray Silvers, sister, Hilde Lauer, sons-in-law, John Meade and Tom Klein.

Thank you Dad, for all you’ve done for me, and the time you spent with me. I will never forget you.

Rita and Silvers kids,
It is never easy to say good-bye to your husband, father, father-in-law or grandpa. May your memories of his live on forever. He will be forever cherished.

Today’s mass was a fitting tribute to a man who meant so much to so many. What a lovely family and legacy he leaves behind. My sympathies to you all.