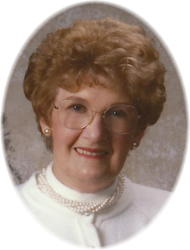 The Mass of Christian Burial celebrating the life of Ethel A. McCarthy, age 95 of Albany, will be at 11:00 AM on Monday, December 29, 2014 at Seven Dolors Catholic Church in Albany.  Ethel died Wednesday, November 12th at the Masonic Home in Bloomington.  There will be a visitation after 10:00 AM until the time of services at the church on Monday.  Arrangements are being made with Miller-Carlin Funeral Home of Albany.

Ethel was born May 6, 1919 in Albany to Rudolph and Alma (Shleppenbach) Hanauska.  She was united in marriage to Joseph McCarthy at Seven Dolors Catholic Church in on February 11, 1947,  She home studied high school and earned a certification in Medical Record Procedures.  She was president of the Sixth District Minnesota Medical Records Association.  She provided space for the first permanent location of the Albany Public Library at their place of business and became Librarian at that time.  She was employed at the Albany Radio Station, Albany Medical Clinic and the Albany Hospital medical records department.  She had may interests including music, care of birds, arts, flowers, gardening, golfing and spending time at the Library.  These were some of her favorite pastimes..  She was a member of the Seven Dolors Catholic Church,  Seven Dolors Christian Mothers, Mother of Mercy Nursing Home Auxiliary, and the East St. Cloud VFW Auxiliary.  She had a busy and interesting life.

She is preceded in death by her parents, her husband Joseph in June of 2001, her grandson Donald, sister Genevieve Wagner, sister/best friend Sally Fisher, and an infant brother Aloys.

I am sincerely sorry to have read of Ethel ‘s passing. I only read of this in paper the day of the service. I truly apologize for not attending Ethel ‘s service. I truly enjoyed knowing your mother, grandmother and friend of music. Especially when Bridget was performing. Ethel loved you all dearly.

My sincere sympathy. I did not know about Ethel’s funeral mass until I spoke with Sandi (Groetsch) Davis at Betty Overman’s funeral this past Friday. I am sorry I missed it.

I always admired Ethel. I did have the pleasure of working with her for a couple of years at the hospital and thanks to Ethel we have some awesome scrapbooks of the hisotry of the hospital. I definitely remember the smiles of Ethel and Sally at Fisher’s.