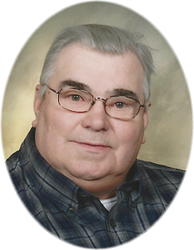 Mass of Christian Burial celebrating the life of Eugene “Gene-O” Anthony Koopmeiners, age 73 of Avon will be 11:00 AM Monday July 7, 2014 at Immaculate Conception Catholic Church in St. Anna.  Father Jerry Mischke will officiate and burial will take place in the Arban Cemetery.  Gene passed away peacefully with family by his side on Wednesday at the Golden Living Center in St. Louis Park. There will be a visitation from 4:00 to 8:00 PM on Sunday, July 6, 2014 at the Miller-Carlin Funeral Home in Albany and again on Monday at 10:00 AM at the funeral home.  Parish prayers will be at 5:00 PM and Knights of Columbus will pray at 7:00 PM at the funeral home Sunday evening.  Funeral arrangements are being made with the Miller-Carlin Funeral Home of Albany.Gene was born on August 26, 1940 to Henry and Olivia (Pohlmann) Koopmeiners in Melrose, MN. Gene grew up in the Freeport/Melrose area.  He served in the Army National Guard for 9 years.  Gene married Joan Messer on May 29, 1962 in West Union. They lived most of their lives in the Avon/Albany area.  He was employed as a truck driver for most of his life, working for Anderson Trucking.  He also owned Gene-O’s Place in Albany for 12 years before retiring in 2007.  He was a member of the Immaculate Conception Catholic Church in St. Anna, the Knights of Columbus and the American Legion in Holdingford.  Gene enjoyed playing cribbage, cooking Sunday breakfast for his family, and making homemade wine, camping and fishing.  Gene enjoyed playing the card game, Skat and had played this game for nearly 40 years.  He and his family were proud to have his card group featured in the St. Cloud Times. He also enjoyed polka and square dancing with his wife.  Gene loved spending time with people and making them laugh.He is survived by his wife, Joan of Avon; children, Doris Eggert (Dean Passe), Albany, Debra (David) Schalke, Chicago, IL; Mark (Michelle) Koopmeiners, Rice; Ginny (Mike) Sauer, Sauk Centre; Joe (Marie) Koopmeiners, Avon and Gayle (Kevin) Feldewerd, New Munich; 17 grandchildren; 2 step-grandchildren; 2 great-grandchildren; siblings, Gilbert (Sally) Koopmeiners, Luxemberg; Art (Lucille) Koopmeiners, St. Cloud; Nellie Hollermann, Albany; Clarence Koopmeiners, St. Augusta; Mary (Gene) Goeser, Munich, ND and Jerome Koopmeiners, Willmar; sister-in-law, Dorothy Koopmeiners, OH.He is preceded in death by his parents Henry and Olivia; sister, Agnes (Joe) Steinemann, brother, Urban Koopmeiners, sister-in-laws, Carol Koopmeiners and Christine Koopmeiners and brother-in-law, Lawrence Hollermann.

Memorials preferred in lieu of flowers.

Your family has our sympathies with the loss of Geno