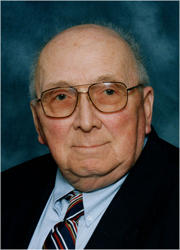 The Mass of Christian Burial celebrating the life of Everett Winkelman, age 87 of St. Cloud, will be will be 10:30 AM Monday at St. Marcus Catholic Church in Clear Lake. Fr. Virgil Helmin will officiate, burial will be in the St. Marcus Parish Cemetery. There will be a visitation from 2-6:00 PM Sunday, March 24 at the Miller-Carlin Funeral Home in St. Cloud and again after 9:30 AM Monday at the church in Clear Lake. VFW Post 4847 will pray at 2:30 PM, Knights of Columbus will pray at 3:00 PM, the American Legion Post 428 will pray at 3:30 PM, and St. Marcus Parish prayers will be at 5:00 PM Sunday at the funeral home in St. Cloud. Arrangements are being made by the Miller-Carlin Funeral Home, St. Cloud. Everett “Wink” was born January 18, 1926 in Princeton to John and Ellen (Grow) Winkelman. He grew up in Foley and graduated from the Foley High School. He proudly served in the U.S. Navy from 1946 until 1948. Everett married Shirley Kraemer on July 27, 1949 in Clear Lake. Everett wore many hats throughout his life’s journey: He was husband, father, grandfather, brother, son, friend. He enjoyed these roles immensely. Everett worked over 20 years as an engineer at the Minnesota Correctional Facility in St. Cloud, retiring in 1986. Wink also loved being active and involved in his community as he served on many boards and organizations. He was the Palmer Township Supervisor for 15 years, he served on the Sherburne County Fair Board, Minnesota State Association/National Association of Engineers, 4-H camp board, He was named Senior Citizen of Sherburne County in 1998 and 2000, he was awarded the Friend of 4-H, and named the King of Palmer Day Celebration. He was a member of the American Legion Post 428, the VFW 4847 and the Knights of Columbus Bishop Marty Council 3603. Wink also could be found enjoying a hand of five hundred with family and friends. He enjoyed hunting and fishing with family and friends and helped Shirley in gardening as well as working in his workshop. He was a member of the St. Marcus Catholic Church in Clear Lake.Everett is survived by his wife, Shirley, St. Cloud, his children, Larry Winkelman, Kelliher; Ellen Sievert, St. Cloud; Sharon Winkelman, St. Cloud; John (Tammy) Winkelman, St. Cloud; Yvonne (Todd) Schendzielos, Clear Lake and Karen (Dennis) Pilarski, Clear Lake. He is also survived by his brother, Chuck (Mary Ann) Winkelman, St. Cloud; his sister, Geraldine Winkelman, St. Cloud; his pride and joy, his grandchildren, Michael, Christopher, Parker, Samantha, Rosamond, Sara, Philip, Paul, Stephen, Suzanne, Nicole, Justin; great-grandchildren, Elle, Trace, Claire, Tarver, Connor, Kali, Bostin, Lager, Brooklynne.Everett is preceded in death by his parents, his sister, Harriett Zawacki, and daughter-in-law Pam Winkelman.The family would like to thank those agencies that were involved with Wink’s health care over the past few years: Good Shepherd community, VAMC-SC, and St. Cloud Hospital Home Care.

I AM SO SORRY FOR YOR LOSS. MY THOUGHTS AND PRAYERS ARE WITH YOU AND YOUR FAMILY.