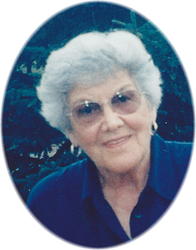 Mass of Christian Burial for Francella T. Peters- Paul age 93, of Cold Spring will be at 11:00 AM on Saturday, February 15, 2014 at St. Boniface Catholic Church in Cold Spring.  Father Matthew Luft, OSB will officiate and burial will take place in the parish cemetery following the mass.  Francella passed away peacefully at the Assumption Nursing Home in Cold Spring early Tuesday morning with her family at her side.  Friends and relatives may call from 9AM until the time of service on Saturday morning at the church in Cold Spring.  Arrangements are being made with Miller-Carlin Funeral Home in St. Cloud.Francella was born at home on May 17, 1920 to Peter and Elizabeth (Mondloch) Olmscheid in New Munich.  She married Eldred Peters in Cold Spring in 1942.  Eldred died in 1988.  Francella later married Francis “Jim” Paul on March 11, 1995 in St. Joseph’s Catholic Church in Waite Park.  He later died on July 4, 2006.  Fran worked as the owner of Peters Food Market in Cold Spring.  She was a member of St. Boniface Catholic Church in Cold Spring, The Christian Women, and the American Legion Auxiliary.Francella is survived by her siblings Genevieve Ryan, St. Paul; Irene Schwinghammer, Waite Park; Eileen Janey, Sauk Rapids; Arnold Olmscheid, St. Cloud; and many loving nieces and nephews.She is preceded in death by her parents Peter and Elizabeth Olmscheid; her husbands Eldred Peters and Francis Paul; her son Gary Peters who died in a hunting accident at the age of 18, and her brothers Bernard, Ralph, Celestine, and Donald Olmscheid.

Friends and relatives may call from 9AM until the time of service on Saturday morning.