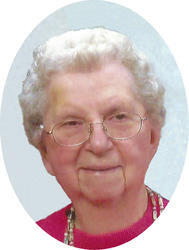 The Mass of Christian Burial, celebrating the life of Frances M. Linn, age 99 of Sauk Center, formerly of Albany, will be 11:00 AM, Friday, April 21 at the St. Anthony Catholic Church in St. Anthony.  Burial will be in the parish cemetery.  Frances died Thursday at the CentraCare Health Care Center is Sauk Centre.  There will be a visitation from 4-8:00 PM, Thursday and again after 10:00 AM, Friday at the Miller-Carlin Funeral Home in Albany.  St. Anthony parish prayers will be at 4:00 PM, Thursday at the funeral home.

Frances was born November 25, 1917 to Aloys and Frances (Wohletz) Sperl.  She grew up in the Albany area and married Albin Linn on September 23, 1943.  The couple farmed together until Albin was killed when his car was hit by a train in 1966.  Frances continued to run the farm with her son, she also worked as a nursing assistant at the Mother of Mercy Nursing Home in Albany and she cooked wedding dinners for Erv Schiffler.  She was an excellent cook, baker and quilter.  She made over 100 quilts in all sizes.  She enjoyed bowling, playing cards, the Minnesota Twins, and the music of Daniel O’Donnell.    She was a member of the St. Anthony Catholic church where she sang in the church choir and she was a member of the St. Anthony Christian Mothers and Catholic United Financial.

Frances is preceded in death by her parents, her husband, Albin and her brothers and sisters; Hy Swinghammer, Alex Sperl, Sylvester Sperl, Robert Sperl, Addie Baggenstoss and great-grandson, Noah Ellis.

The Mass of Christian Burial, celebrating the life of Frances M. Linn, age 99 of Sauk Center, formerly of Albany, will be 11:00 AM, Friday, April 21 at the St. Anthony Catholic Church in St. Anthony.

You will be missed, but never forgotten, you Old Crow!

i extend my condolence to the family . I hope that the many warm and happy memories help with your grief . Also , comfort can be found at Isaiah 41:10  and Isaiah 25:8 where God is giving His love to  ones that are suffering with grief because of losing a loved one .