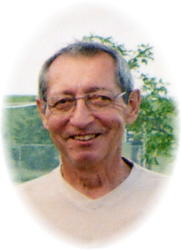 A Memorial Service celebrating the life of Frank “Arnie” Jirik, 65, of St. Augusta will be at 6:00 PM on Tuesday, July 30th, 2013 at the Miller-Carlin Funeral Home in St. Cloud.  Brother Walter Kieffer, OSB will officiate and innichment will take place at St. John’s Abbey Cemetery following the service.  There will be a visitation from 4:00-6:00 PM on Tuesday, July 30th, 2013 at the funeral home.  Arrangements are being made with Miller-Carlin Funeral Home in St. Cloud.Frank was born on October 5, 1947 to Frank and Stella (Skluzacek) Jirik in Northfield.  He grew up on a farm near Webster alongside six siblings.  When he was 19 years old, Frank joined the monastery at St. John’s where he was a monk for approximately 25 years.  On August 22, 1998, Frank married Leslie Ann Gaertner and welcomed his new family enthusiastically.  He was a hardworking man who dedicated himself to many different things.  Frank was most at home outdoors and he loved to go fishing, deer hunting, grilling and camping, as well as sitting by bonfires and watching sunsets.  He also enjoyed gardening and took pride in his lawn.  Frank liked to spend time at his friend’s farm cutting wood, playing card games, and cooking.  His passion, however, was his family and he was sincerely interested in how everyone was doing and what they were up to.  Frank has been described as an approachable, non-judgmental man who was easy to talk to and always had a hug for everyone.  He was a loving husband and will be dearly missed by all who knew him.Frank is survived by his wife of 14 years, Leslie; his stepchildren Steven (Sunita) Reber, Waite Park; Joe (Mindy) Nelson, Rochester; Greg (Jessica) Nelson, Sartell; his siblings Dave (Bernice) Jirik, Lonsdale; Mary Kay (Dennis) Ceplecha, Webster; Mark (Nancy) Jirik, Montgomery; Anne (Ed) Svoboda, Lonsdale; John (Janet) Jirik, Lonsdale; five grandchildren; 4 godchildren, many nieces and nephews; and many other relatives and friends.He was preceded in death by his parents Frank and Stella Jirik and his brother Dan Jirik.

We are so saddened to here of Frtiz’s passing. He truly was an inspiration to us and always full of fun. We will miss him. Our thoughts and prayers go out to his family.

There are no words that will lessen the pain his wife and family are going through. However, knowing this gentle and kind man over the years has been an inspiration. He always had hugs and smiles for each of us. Never had an unkind word to say about anyone. The earth is less rich now without his presence, however take solace in the memories he has left with us all. I for one, will dearly miss him as my brother-in-law and friend. RIP , my dear and look down showing us your smile. We love you.

Our prayers and condolences to the family. Arnie was a dear friend (more like big brother) while I attended St. John’s. Will always remember his great smile and true love of Life.

Arnie was always there for those that needed him. He never judged anyone and always listened and tried to help. I am so sorry to hear of his passing. During high school he and Leslie were wonderful to me when I needed guidance. My thoughts and prayers are with Leslie, Steve, Joe, Greg and family.

Arnie was an amazing man and great Father to all of Us I will forever miss him and think of his solid love for life and for us children. You are dearly missed. We love you.