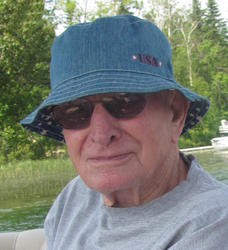 Memorial services for Fred Luckeroth, 97 of St. Cloud will be 11:00AM Saturday, January 20, 2018 at the Country Manor Chapel in Sartell, MN. Visitation will be from 9:00AM until the time of service at Country Manor Chapel. Interment will be at a later date.

Fred was born February 1, 1920, in Collegeville Township, the first-born son of Ignatius and Anna (Ross) Luckeroth. Fred attended St. Mary’s Grade School and Central Junior High School in St. Cloud.   After his Father died when Fred was 17, he enlisted in the Civilian Conservation Corp (CCC) and worked for two years, 1937-1938, at Rabideau Camp near Blackduck, MN. Fred served in the Army during WWII from 1942-1945. Fred was united in marriage to Vera Shank on June 28, 1944 in Chicago, IL. In November 1945, when Fred was discharged from the Army, the couple made their home in St. Cloud. Fred began working for the Great Northern Railroad at their Car Shops in Waite Park. He eventually became a crane operator, and retired in 1982. Fred was a member of St. Mary’s Cathedral and VFW Granite Post #428 in St. Cloud, and the National Association of Retired and Veteran Railway Employees (NARVE) Unit 107.

Fred enjoyed his retirement years fishing, gardening, and spending time with his kids, grandkids, and great-grandkids. He was also an avid Twins and Vikings fan.

Fred will be missed by all who knew him.

In lieu of flowers memorials are preferred to Whitney Meals on Wheels program. Fred looked forward to the friendly volunteers that delivered him nutritious lunches daily.

Thank you to the staff at Country Manor for the care and comfort provided to Fred during his stay.

Visitation will be from 9:00AM until the time of service at Country Manor Chapel in Sartell, MN.

Memorial services for Fred Luckeroth, 97 of St. Cloud will be 11:00AM Saturday, January 20, 2018 at the Country Manor Chapel inSartell,MN. Interment will be at a later date.

my my thoughts ,prayers and Heart is with you all. Uncle Fred – such a sweet good man . My mind has been filled with such great memories from all the years we only lived a block away and he always calledcalledme Annie . He and my Mom were close and uncle Fred shared all his goodies from his Garden every year with our family.  He will be missed by all.

So sorry for your loss.  Keep all the happy times you had with him always in your hearts.

we’re both saddened by your fathers passing he was one of the really good guys. You should have solace in the memories of how excited and proud he was when he spoke of each of you. Hang onto the good times you had together as a family.

Fred, So sorry to hear of the passing of your father. It’s tough losing a Dad. I know he was a great person.      Jeff and Sue Bakke

Fred,  So sorry to hear of the passing of your father. My prayers are with you and your family in mind.

So sorry to hear of the loss of your father. It’s tough losing a parent. Our prayers are with you and your family in mind.  Jeff abd Sue Bakke