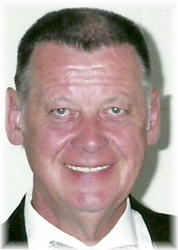 The mass of Christian Burial celebrating the life of Hank Koshenina, age 65 of Waite Park, will be 9:00 AM Monday, June 13 at St. Mary’s Help of Christians Catholic Church in St. Augusta. Hank died unexpectedly Thursday at the St. Cloud Hospital. Burial will be in the Minnesota State Veterans Cemetery in Little Falls. There will be a visitation from 3-6:00 PM Sunday evening at the Miller-Carlin Funeral Home in St. Cloud and again after 8:30 AM Monday at the church in St. Augusta.Hank was born May 20 1946 in Little Falls to John and Christine (Van Heel) Koshenina. He grew up in Upsala and moved to St. Paul. He graduated from high school and entered the U.S. Army. He returned to St. Paul after his discharge. Hank married Peggy Burgraff on August 29, 1981 in St. Paul. He worked at the Ford Motor Company Assembly Plant in St. Paul for over 31 years, retiring in 1998. After his retirement from Ford, Hank and Peggy moved to Red Wing where Hank drove school bus. They moved to Milica and then Brook Park before moving to Waite Park in 2009. Hank is a member of the United Auto Workers Union and a former member of the St. Paul Police Reserves.Hank is survived by his wife, Peggy Koshenina, Waite Park, his children; Julie (Randy) Olson, Jill (Terry) Madden, Molly (Glenn) Isnardi, Christine Koshenina,and Kelly Koshenina. He is also survived by his brothers and sisters; Paul (Sarah) Koshenina; Bob (Dorothy) Koshenina; John (Pat) Koshenina Jr.; Eileen (Tom) Jacobowski; Marlene (Jim) Trudeau; Sharon (Art) McKusik; Susan Marque, 8 grandchildren and 6 great-grandchildren.He is preceded in death by his parents, his son, David Crenshaw and his brothers and sisters, Jerome Koshenina, Richard Koshenina, Delores Sura and Mary Ann Lommel.

Pedro and I were just talking about you and Hank the other day, wishing that you would stop and visit us. How sad we were to see the obit in the newspaper this morning about Hank’s passing away. We loved him! We wish you and your family strength and peace.