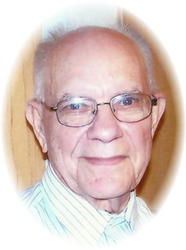 Services celebrating the life of Harold Oscar Callander, age 86 of Waite Park formerly of Kimball area, will be at 12:00 Noon on Friday, August 10, 2012 at the Miller-Carlin Funeral Home in St. Cloud.  Father Daniel Walz will officiate and burial will take place at 2:00 PM at Camp Ripley in Little Falls.  Harold passed away at home early Monday morning surrounded by his family.  There will be a visitation at 11:00 AM until the time of service on Friday, August 10, 2012 at the funeral home.Harold was born on May 1, 1926 to Arvid and Mary (Larson) Callander in Kingston Township.  He was raised on the family farm with his brother Al until graduating high school.  Harold joined the US Army 11thAirborn serving in the Pacific Theatre and Japan.  He attained the rank of Sergeant before being honorably discharged in 1946.  Harold married Dolores Chmielewski on May 18, 1955 and together they raised two children, Kevin and Sandee.  He was a hard worker and was self-employed as a meat-market owner, over-the-road trucker, and owner of Century 21-Callander Realty in Champlin.  Harold, along with his brother Al, built the Playland Ballroom in Kimball, MN.  Shortly after it was built, he sold it to Al and hi wife Phyllis.  Harold also worked as a gear foreman for FMC for 30 years.  He is known for being an honorable man, for his love of vintage cars, his wood crafting, and his devotion to his family.Harold is survived by his wife, Dolores, of 57 years; his children Kevin Callander, Minneapolis; Sandee Callander-Biddle, Waite Park; his grandchildren Christopher Callander, Nicholas VonFelden; and his great-grandchildren Kaylei VonFelden, and Nicholas VonFelden, Jr.He is preceded by his parents, Arvid and Mary Callander; and his brother, Al Oberg.

The last of the Callander’s older generation as I know it.
I always enjoyed talking with Harold and listening to his stories about the family when I seen him at different funtions.
Thinking of you in this time of sorrow.
Randy