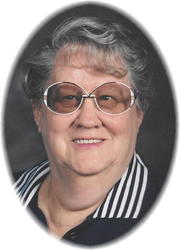 Services celebrating the life of Helen C. DeLong, age 82, of St. Cloud, will be 11:00 AM, Tuesday, April 19 at Bethlehem Lutheran Church in St. Cloud.  Burial will follow in NorthStar Cemetery.  Helen died Thursday at her home at the Legacy of St. Michael.  There will be a gathering of friends and family Monday night from 5:00 until 7:00 PM at the Miller-Carlin Funeral Home in St. Cloud.  Friends and family may also gather after 10:00 AM, Tuesday at the church in St. Cloud.

Helen was born February 16, 1934 in Minneapolis to Leland and Mabel (Peterson) Nolan.  She married Richard DeLong in Minneapolis on December 12, 1953 and the couple moved to St. Cloud, where Helen has lived ever since.  She worked as a secretary for several years at Security Financial, which eventually became Metropolitan National Bank, and also worked as a legal secretary for Michael and Thomas Murphy in the early 1980s.  Helen was on the St. Cloud School Board in the late 1970s.  She was  a member of Bethlehem Lutheran Church and she was active in the St. Cloud Area Fun Singers.  Helen loved music and flowers.  She enjoyed her garden and being close to nature.

She is preceded in death by her parents, her husband Richard on April 11, 1999, her sister Betty Zustiak and her brother, Robert Nolan.

Friends and family are welcomed to gather on Monday, April 18, 2016from 5:00 until 7:00 PM at the Miller-Carlin Funeral Home in SaintCloud. There will also be a gathering from10:00 AM until the service begins Tuesday morning at Bethlehem Lutheran Church in Saint Cloud.

Funeral services will be 11:00 AM onTuesday, April 19, 2016 at Bethlehem Lutheran Church in SaintCloud. Burial will follow in NorthStar Cemetery.

Robin, Penny, Tammy, Mary and Amy – I have thinking of all of you in the last few days and have prayed for  you and your families.  I will not be able to be there today, but will be remembering you this morning.  Peace and comfort to all of you.