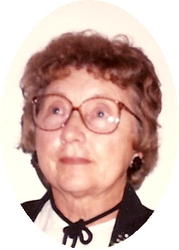 Services celebrating the life of Helene E. Habiger, age 88 of Freeport will be 11:00 AM Thursday, March 8, at Our Saviors Lutheran Church in Albany.  Helene died Monday at the Mother of Mercy Nursing Home.  There will be a visitation after 10:00 AM Thursday at the church in Albany.  Arrangements are being made by the Miller-Carlin-Brenny Funeral Home in Albany.Helene was born December 11, 1923 in Albany to Otto and Marie (Hamann) Sabrowsky.  She grew up in Albany and graduated from high school then attended beauty school.  She worked as a hairdresser for a short time.  Helene and Jerome were married September 6, 1952 in St. Paul.  The couple lived on their farm in Freeport their entire marriage.   Helen was a good farmer and she was particularly good with the animals.  She was a member of Our Saviors Lutheran Church.She is survived by her husband, Jerome Habiger, Freeport, and sisters-in-law, Donna Sabrowsky, Villard and Juletta Sobrowsky, Albany.She is preceded in death by her parents, her brothers and sisters, Ella Hodel, Clara Sabrowsky, Loretta Hayman, Ida Christen, William Sabrowsky, Otto Sabrowsky, Arnold Sabrowksky, Nester Sabrowsky and Russell Sabrowsky

Visitation will be one hour prior to the services on Thursday, March 8, 2012

Visitation will be at Our Saviors Lutheran Church in Albany

Jerry I am saddened to hear from Brother Tim about the death of Helene. You have my sincere condolences!