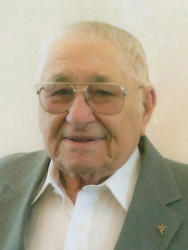 Herman Solarz was born October 15, 1926 in Holdingford to Zachary and Mary Rose (Kostreba) Solarz.  He married Deloris (Dotsie) Kostreba on September 29, 1949 at St. Columbkille Catholic Church in St. Wendel, she died in 1983.  He married Karen Kurtz on October 17, 1992 at St. Columbkille Catholic Church in St. Wendel.  Herman attended country school in Holdingford until the 8th grade.   He served in the Army during World War II in Manila and the Philippines.  He worked in construction and was a mechanic at Kroska Motors until he retired.   Herman was a member of All Saints, St. Hedwig since 1949.  He was a member of the Frank Feia American Legion Post #211 for over 70 years.  He enjoyed fishing, hunting, riding his Harley Davidson, fixing cars, yard work and spending time with his children, grandchildren and other family members.  He enjoyed watching the Discovery Channel and American Pickers.  He watched the Catholic Mass faithfully on T.V.  Herman will be remembered for chewing Redman tobacco when awake: first thing in the morning and last thing until he went to bed.  Mary’s dog, Swirl, grew on Herman, she was his companion when Mary & Karen were at work.

The family would like to thank the Kidney Dialysis unit in St. Cloud and the St. Cloud Hospital.  A special thank you to all those who helped in caring for Herman.  The dialysis staff and fellow patients were like a second family for Herman in the past years.

Friends may call from 4-8:00 PM on Tuesday, November 14 at All Saints St Hedwig and after 10:00 AM, Wednesday at the church in Holdingford. St. Hedwigs parish prayers will be at 6:00 PM Tuesday followed by the Frank Feia American Legion Post #211 at 7:00 PM Tuesday.

The Mass of Christian Burial will be at 11:00 AM, Wednesday, November 15 2017 at All Saints, St. Hedwigs Catholic Church in Holdingford. Father Gregory Mastey will officiate, burial will be in the parish cemetery.