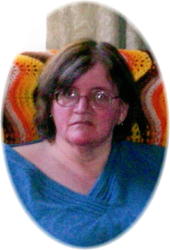 Memorial Services celebrating the life of Holly Jean Anderson, age 57 of St. Cloud, MN (formerly Cornell, WI) will be 11:30 AM on Friday, March 22, 2013 at Holy Cross Catholic Church in Cornell. There will be a luncheon following the service and burial will take place at the Cornell Cemetery at a later date. Holly died peacefully at the St. Cloud Hospital in St. Cloud Minnesota after a long and courageous fight with MS. Holly was born on June 17th 1955 in Chippewa Falls, WI to John and Barbara (Warner) Geist. She grew up in Cornell, but moved to Holcombe WI, then Litchfield MN, and eventually St. Cloud, MN where she lived the rest of her life. She married Gary Anderson on March 23, 2003. She worked a variety of jobs from being a book-keeper, to managing a Cenex Deli, but the thing she enjoyed the most in life was spending time with her family. She was a past member of Holy Cross Catholic Church in Cornell, and an active member of the M.S. Society.Holly is survived by her husband Gary Anderson, St. Cloud; her children Angie (Amanda McClure) Oemig, Eau Claire, WI; John (Christina Trujillo) Oemig II, Denver, CO; her step daughter Kelli Anderson Luckas, Andover; her grandsons John Oemig III, Logan Luckas, Devon Luckas; and her siblings Hope (Glen) Logan, Cornell; Pamela (Sean Cantwell) Geist, Chippewa Falls; and Heidi (Dan) Fasbender, Cornell.She is preceded in death by her parents Barbara and John Geist, her sister Melissa Jo Geist, and her first husband John Oemig Jr.

Memorial Services celebrating the life of Holly Jean Anderson, age 57 of St. Cloud, MN (formerly Cornell, WI) will be 11:30 AM on Friday, March 22, 2013. There will be a luncheon following the service and burial will take place at the Cornell Cemetery at a later date.

Holly was one of my best friends at Opportunity Matters and swapping books all the time.
I miss her already, so very much.

I love you. I am comforted in knowing you no longer suffer.

Gary we are so saddened to hear of Holly’s passing. May you have comfort in the memories you will carry in your heart and know that she is now free of pain and will forever be watching over her family. It was both an honor and a pleasure to have known her.

Much love,
John and Bonnie

We were so sad to learn Holly passed away. While we know she no longer suffers, the world will be a little less bright without her ready smile and kind heart. When Terri worked with Holly at Tom Thumb in Litchfield, she was always a favorite co-worker. Our prayers are with all of her family who miss her so much. ~~ Jeff & Terri