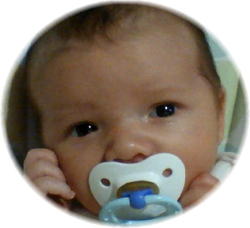 Services celebrating the life of Ilijah James Hoell, age, 3 months, of Bemidji, MN will be announced by his family members.  Ilijah died in the arms of his parents Wednesday, May 30, 2012 at Sanford Children’s Hospital in Fargo, ND.  Arrangements are being made with Miller-Carlin Funeral Home in Albany.Ilijah was born on February 27, 2012 to Jaimee Lyn Holthaus and Jonathon A. Hoell in Bemidji.  He was brought home by his loving parents to meet his proud big sister Kayden-Lois.  Although taken from this world too soon, Ilijah James was a beloved baby boy.He is survived by his parents, Jaimee Holthaus and Jonathon Hoell, Bemidji; his sister Kayden-Lois Hoell, at home in Bemidji; his grandparents Cecilia Notch and Roger Notch, Jr, Albany, Julie Hoell, Bagley, and Ben Beauliuo, Bagley.He is preceded in death by other relatives, especially Great-Grandma Bitty.